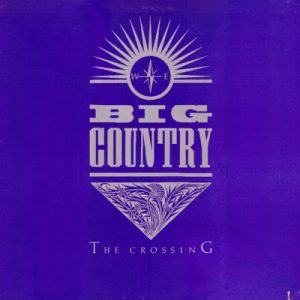 A new band of heroes emerged in the early ‘80s whose music seemed to bristle against English rule (of the airwaves anyway) while championing the working-class struggle: U2, Dexy’s Midnight Runners, The Alarm, Big Country. The Crossing is a powerful debut, a call to arms and a call for change, led by the intoxicating “In A Big Country.” Stuart Adamson and Bruce Watson both played the e-bow, an instrument that evoked their Scottish roots with its plaintive sound. Their music was instantly identifiable and, unfortunately, just as quickly pigeonholed by American listeners. Like the work of Echo & The Bunnymen, it takes a little while for Big Country’s songs to develop their own identities, and lazy ears might dismiss their albums as so much British brouhaha. However, at the core of The Crossing is plenty of talent and tunefulness, almost a cross between The Cure and U2. Producer Steve Lillywhite understood that even alternative rock could benefit from mainstream melodies, and you’ll find that logic behind tracks like “Chance” and “Close Action.” Yet it was the anthems that won them an audience, such as “Fields of Fire,” “Harvest Home” and “1000 Stars.” The image of fire appears throughout, as working-class people are driven from their homes, crossing into an uncertain future. In a sense, the music of Big Country embodies the relentless pursuit of hardships that its characters endure. America, the land of aspiring hedonists, didn’t share the band’s dour outlook and had little long-term use for songs about life’s struggles, while in the UK this message had particular resonance. Thus the music of Big Country was a reluctant export to the US, its ethnic ardor quickly filed under “quirky foreigners” and revived only when their famous four-minute rallying cry (“In A Big Country”) proved efficacious in a parade of ‘80s anthems. The Crossing is so much more than that, of course. It’s the ardent, uncompromising voice of youth and revolution, the Scottish voice that would not be subdued, a standard under which the meek shall inherit the earth. Unchained spirits will hear this in The Crossing, and realize that no country was big enough to contain such a significant talent.

All songs written by Big Country.