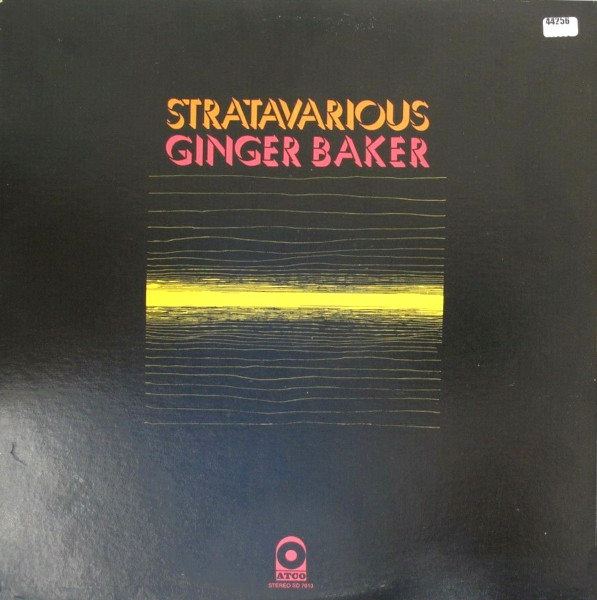 Basically half a Fela album and half an album of rock + drum workshop.

Stratavarious marks the last in a brief flurry of records that featured both Ginger Baker and Fela Ransom-Kuti; it is the only one to be released exclusively under Baker’s name. As its title suggests, this collects various sides of Baker: African music, blues-rock, drum workshops and a little madness. A drum duet between Baker and Ghana’s Guy Warren, Blood Brothers 69, dates back as far as 1969.

Personally, I feel the previous three Fela records—Fela’s London Scene, Live! and Why Black Men Dey Suffer—contain better music. The Air Force efforts are stronger too, making this not-so-arguably the weakest of Ginger’s early albums. Still, there’s plenty to keep you engaged here, including two new songs from Fela, Ariwo and Tiwa, and a couple of Eric Clapton-styled numbers featuring Bobby Tench under the pseudonym Bobby Gass. The latter are interesting as the only examples I can recall of Fela playing in a rock setting.

“Ariwo” features vocals from Sandra Danielle, who was then romantically linked with Fela. (Insert joke about “Who wasn’t romantically linked to Fela Kuti?” here.) It’s a sensual ceremony of organ, bass, drums, percussion and voices, which is to say a typical Fela song of the time minus the horns. “Tiwa” is a joyful number that would have been a welcome addition on any of the aforementioned Fela albums. Bobby Tench concedes nothing to Maurice Ekpo on bass.

Tench serves as a centerpiece on the instrumental Something Nice (sort of Baker’s answer to Clapton’s “Slunky”) and the catchy Ju Ju, on which Tench does a pretty good Clapton impersonation on vocals and multitracks rhythm, lead and bass guitar. Baker reclaims the spotlight on “Blood Brothers 69,” a military march with Warren providing African counterpoint, and closes with a bizarre mix of synthesizers and spoken voice, Coda. You wonder if Ringo Starr didn’t have this in mind when he ended Ringo’s Rotogravure with “Spooky Weirdness.”

If you’re interested in the adventures of Ginger and Fela, Live! is the place to start. But Baker only cameos on the other two records, so Stratavarious is the logical followup if you want to hear the further adventures of Fela and Ginger. As one of the more interesting musical partnerships in rock, I can’t imagine why you wouldn’t.