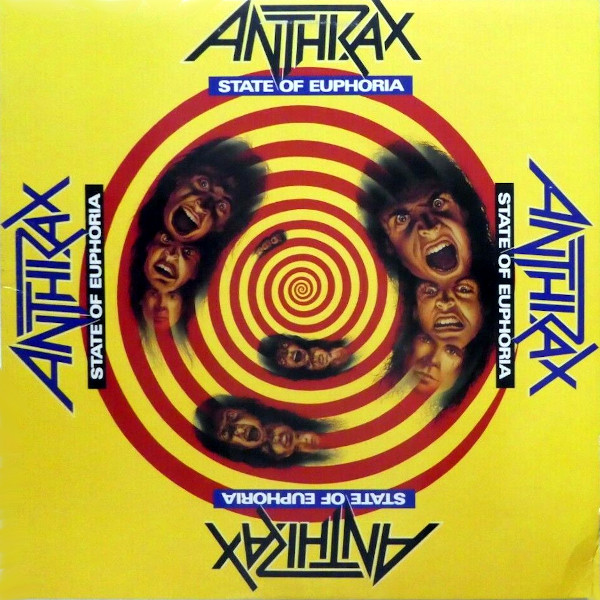 Kronomyth 4.0: The metal church of anthrax.

In the late 1980s, thrash metal went mainstream. Anthrax, Megadeth and Metallica were now Top 40 bands. Maybe the success went to Anthrax’ head or maybe, like the rest of the world, they were starting to take their music more seriously. Whatever the reason, the band decided to go after a more aggressive and sophisticated sound on State of Euphoria. The results were polarizing. Some missed the band’s sense of humor (myself included), others found the sharpened attack a source of joy.

The band brought in Metal Church producer Mark Dodson to give the music a darker edge. The songs often have an atmospheric introduction (similar to The Dark), the rhythm section is jacked up to fourteen on a scale of 1 to 10 and the production is impossibly tight. The result, to me, feels heavily processed where Among the Living felt raw. It’s the main reason I’m not a huge fan of State of Euphoria; everything sounds like it’s been run through the same metal grinding machine.

As others have pointed out, the most memorable song on the album is a cover of French heavy metal band Trust’s Antisocial. That’s not to say that there aren’t some really good songs on here—Now It’s Dark, Make Me Laugh, Who Cares Wins—but nothing that I’ve ever caught myself singing like “A.I.R.” or “Caught in a Mosh.” You want to marvel at the superhuman efforts of Charlie Benante and Dan Spitz, but that’s just the problem: they seem more machine than human.

Under the surface, the band’s likeable fanboy persona remains. Misery is based on the Stephen King novel, “Now It’s Dark” is an homage to the cult film, Blue Velvet. The band tackling racism (Schism), homelessness (“Who Cares Wins”) and religious hypocrisy (Make Me Laugh) is a bit much—you can’t tear down the world and save it at the same time—although at least they mercifully left the Indians alone this time.

In some ways, State of Euphoria is a bold step forward. It’s certainly their most ambitious album from a production standpoint. It also, however, requires a certain stamina to get through nine pummeling tracks of digitally processed thrash metal without losing enthusiasm for the album. The one thing left behind in the band’s move to a darker sound is the voice of Joey Belladonna, who now sounded like the lone human being in an army of machines.

All songs composed by Anthrax unless noted.