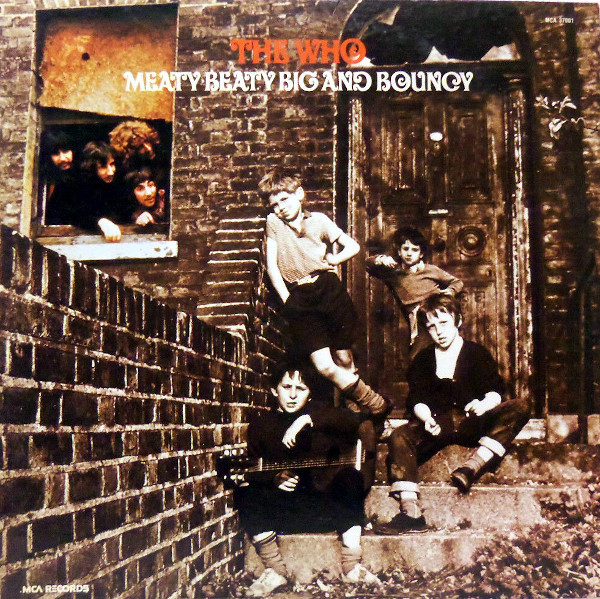 This greatest hits collection is a great overview of The Who’s biggest hits so far, many unavailable on album until now.

Accept no substitute. These swingin’ singles justify every noisy experiment, outlandish concept or kinky kompliment that gummed up their early albums. Singlehandedly. Because The Who were consistently brilliant when it counted. I can see pictures of Lily for miles anyway anyhow anywhere I choose, thanks to Meaty Beaty Big And Bouncy. Need proof that The Who were great out of the gate? Here’s 200 proof. There isn’t a song among these fourteen tracks that isn’t sharp for the attack. The Seeker. I Can’t Explain. M-M-My Generation. These lights didn’t dim with distance like All Day And All of the Night or A Hard Day’s Night. If goin’ mobile isn’t an option, I’ll take the magic bus without so much as a whimper.

There’s no question that, among their albums, Who’s Next is as solid as a collapsing star. But their early albums had holes. That’s because the band saved their best music for singles. Remember, British listeners treated singles and albums as separate entities. Singles were not simply promotional teasers but self-standing entities. Stacked atop one another as they are here, The Who’s early singles dwarf whatever achievements the early albums could muster (not to sell The Who Sell Out short). As a result, Meaty Beaty becomes not a superfluous sampler from their first four albums but a vital assembling of their early wonders, the foundation of their reputation. It’s the place to start, that first sheepish knock at the door, and a sanctuary for the weary fan who’s forgotten the first tender strains of love that prompted him or her to choose this course. I return to this album often because I need reminding, because A Quick One is slow going, because my roving eye wanders during their long-winded concept albums. And I listen. And I’m in love again.