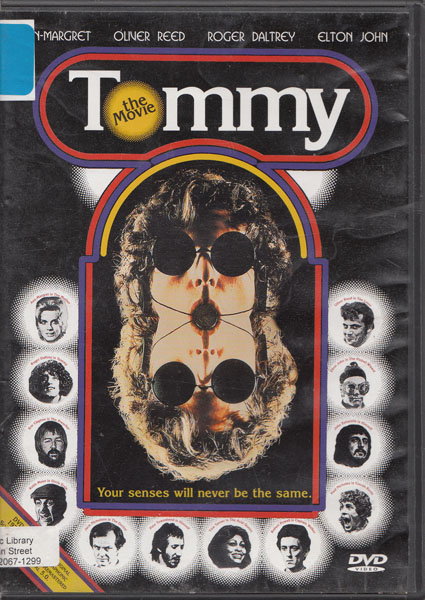 Ken Russell’s film adaptation of Tommy featuring a who’s who of rock and film stars, including The Who.

Kronomyth 10.5: Do you think it’s alright to leave the boy with cousin Kenny?

Okay, so Oklahoma! it wasn’t, but even Pete Townshend didn’t envision a Tommy as twisted as this: Ann-Margaret in a full-body fishnet covered in beans; Roger Daltrey in a shiny, syringe-spiked iron maiden; Elton John in six-foot platform shoes; Marilyn Monroe turned miraculous madonna. Ken Russell went full-on gonzo with this one, turning The Who‘s rock opera into a Tommy Horror Picture Show, which I suppose is fine if it’s midnight and you’re stoned (or just stone-bored) out of your gourd. The trouble with Tommy the Movie is that, for the most part, the singers can’t act and the actors can’t sing. You could also argue that the director lacked proper direction, turning Tommy into a Felliniesque travesty of taste, but then you’d have to use the word “Felliniesque” and you don’t want to do that, do you?

As much as I enjoy concept albums, rock music rarely makes the leap to the silver screen gracefully: The Wall, The Song Remains The Same, 200 Motels, Give My Regards To Broad Street, True Stories. Quadrophenia made more sense as a movie, I thought, but it wasn’t a musical. Tommy at least deserves credit for being a remarkably ambitious adaptation of the original, one that sought to match art with art. Given the fact that people still talk about this fim, maybe Russell was an inspired choice after all. Plus, it couldn’t have been easy to corral so many personalities and egos (Pete Townshend, Ann-Margaret, Oliver Reed, Jack Nicholson, Elton John, Tina Turner and dear old Moonie among them) while working with a lead actor (Daltrey) who had no real acting experience. Come to think of it, only a maverick like Russell would have taken the job in the first place.