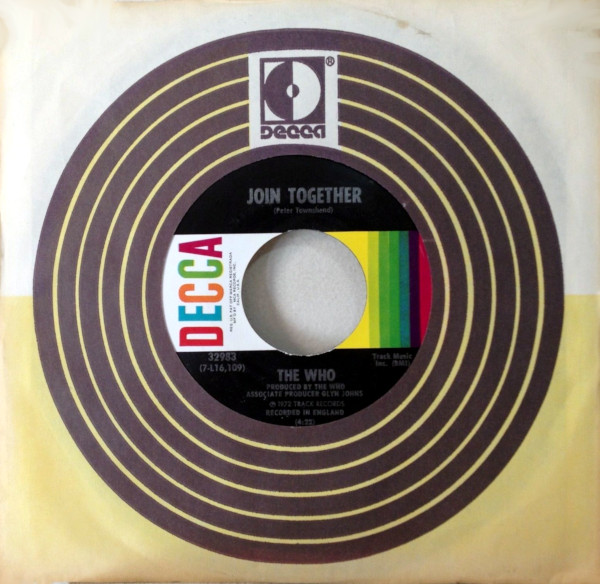 If you weren’t already a member of Tommy’s army, here was your invitation to join the band.

This is the only song I’m aware of that features both the synthesizer and the jew’s harp. That it works despite the strange pairing is a testament to the songwriting skill of Pete Townshend. “Join Together” is one of those anthemic songs that seeks to make a connection between the band and its audience. I’m not sure what its original purpose was in Rock Is Dead – Long Live Rock, but I don’t know that Townshend had all those pieces stitched together in his head either. When the concept collapsed (like Lifehouse before it), “Join Together” joined “Relay” and “Long Live Rock” as singles from an album that never materialized.

The flip side is a fire-breathing version of Marvin Gaye’s “Baby Don’t You Do It” from the same lads who brought you Live At Leeds, recorded live in 1971. The song had actually been a part of The Who’s live act since the early days. I thought their original versions were impressive, but this version takes it to a whole new level in a great mix that splits Entwistle’s brilliant basswork and Townshend’s guitar into different channels and leaves Moon’s cymbals ringing in your head for minutes after the song is over. If you enjoyed the outtakes from Led Zeppelin’s Coda, you’ll get a kick out of hearing The Who tear through this one for six scorching minutes.