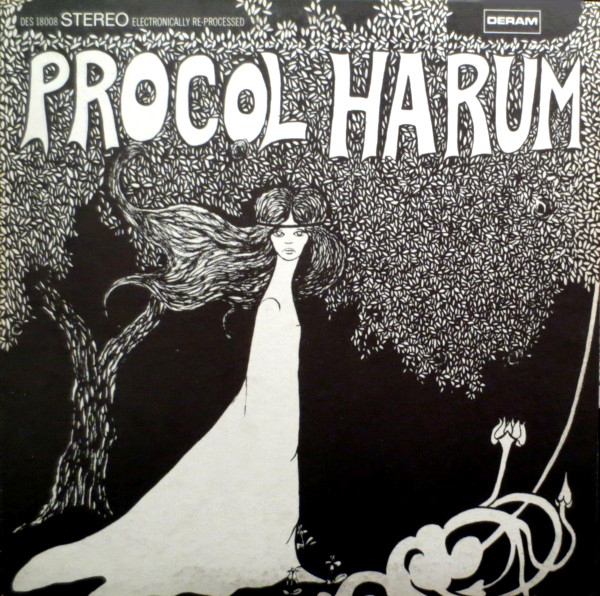 Although initially lost in the flurry of psych/prog releases at year’s end, this is today recognized as an early classic in the genre.

In the waning months of nineteen sixty-seven, psychedelic/progressive masterpieces began to sprout like weeds: Days of Future Passed, Disraeli Gears, Magical Mystery Tour, Mr. Fantasy. Even The Rolling Stones (Their Satanic Majesties Request) got into the act. By nineteen sixty-eight, the progressive movement was in full bloom. One of the best (and one of the earliest) of these proto-prog albums was Procol Harum, the eponymous debut from the authors of that sublime and highly successful single, “A Whiter Shade of Pale.” Yet, despite the fact that Procol Harum was hardly unknown, their album went virtually ignored in England.

The timing of Procol Harum was prescient. Their was some antecedent for their eccentric and highly literate English rock in the music of Bob Dylan and, of course, The Beatles, but the band’s first record anticipated many of the achievements that would soon be popularly credited to Cream, Traffic and The Moody Blues. The timing of its UK release, however, was awful. Regal Zonophone delayed the album for several months to make way for the band’s second single, “Homburg.” By the time Procol Harum was released in December, other bands had beaten them to the proto-prog punch. Worse still, the album contained neither “A Whiter Shade of Pale” nor “Homburg.”

In the US, wiser heads prevailed. The album was released in September, included “A Whiter Shade of Pale” as the leadoff track (in return, “Corporate Clack” was furloughed) and charted a respectable forty-seven—about as good as an eccentric, literary English rock band might expect. Through the headphones of history, we can now appreciate Procol Harum as a unique and forward-thinking album that anticipated the progressive trend toward outside lyricists, classical influences and dramatic arrangements. Calculating its influence, however, is harder. It would be tempting to connect the dots between this album and Traffic, particularly given the vocal similarities between Gary Brooker and Steve Winwood, or draw a connection between Matthew Fisher and Jon Lord, but the reality is that Regal Zonophone did a good job of making sure that no one heard Procol Harum, let alone claimed to be influenced by it.

A whiter shade of prog

Personally, I’ve never subscribed to the idea of Procol Harum as a progressive rock band. They share many of the same qualities—classical motifs, literary subject matter, excellent musicianship—but stray safely from prog’s famous excesses (side-long suites, science-fiction/fantasy themes, virtuosic arrangements, etc.). When Procol Harum was released, prog didn’t even exist, and slapping a label on them after the fact seems unfair and unwarranted.

So if this isn’t prog, what is it? Let’s start with the “proggish” pieces: “Conquistador,” “Cerdes” and the closing instrumental, “Repent Walpurgis.” The first two invoke dead heroes and fantastical creatures, the proper purview of prog to be sure, and match poetry with clever musical arrangements. The latter is essentially a musical battle between Matthew Fisher’s organ and Robin Trower’s guitar. I’d cite the first two as favorites and then point you in the direction of Barclay James Harvest or The Nice if you want to hear a keyboard player bring out his big classical guns.

The keyboard angle is an interesting one for Procol Harum. There is, of course, Matthew Fisher’s organ, the band’s dominant instrument and, beneath that, the piano of Gary Brooker. Robin Trower, a guitarist that most bands would love to have, is kept on a relatively short leash, although you could say the same about Ritchie Blackmore on those early Deep Purple albums. Fisher was one of the first musicians to bring the organ into a rock setting. Al Kooper (Blonde On Blonde) is the obvious precursor, and his work is evoked on “Salad Days.” Another organ player, Steve Winwood, comes to mind during “A Christmas Camel.”

The album also has some strange, silly, tuneful numbers that remind me of Cream at their lightest: “She Wandered Through The Garden Fence,” “Mabel” and “Corporate Clack.” Again, it’s tempting to look forward to songs like “She Came In Through The Bathroom Window” and “Corporal Clegg” and wonder if some of those copies of Procol Harum hadn’t fallen into famous hands, but it seems irresponsible to speculate. Of the remaining tracks, “Kaleidoscope” ends with a big bang and “Something Following Me” taps into blues-rock with good results.

The band’s debut has attracted more attention over the years, and there are many who count it among their favorites. For a certainty, it has helped forge more than a few Procol Harum fans. It is not, however, that lost missing link, the “first prog album” ever. In fact, it’s not really prog at all. It’s an intelligent, artistic, psychedelic pop/rock album featuring some remarkable musicians. (I had meant to get in here somewhere that B.J. Wilson is one of the better drummers from the era.) I would feel comfortable including it with the best rock albums of its day and, like many, must wonder aloud why Procol Harum didn’t vaunt the band into the same rarefied ranks as Traffic and The Moody Blues.

All songs written by Gary Brooker and Keith Reid unless noted.

Original LP Version (UK)
A1. Conquistador
A2. She Wandered Through The Garden Fence
A3. Something Following Me
A4. Mabel
A5. Cerdes (Outside the Gates of)
B1. A Christmas Camel
B2. Kaleidoscope
B3. Salad Days (Are Here Again)
B4. Good Captain Clack
B5. Repent Walpurgis