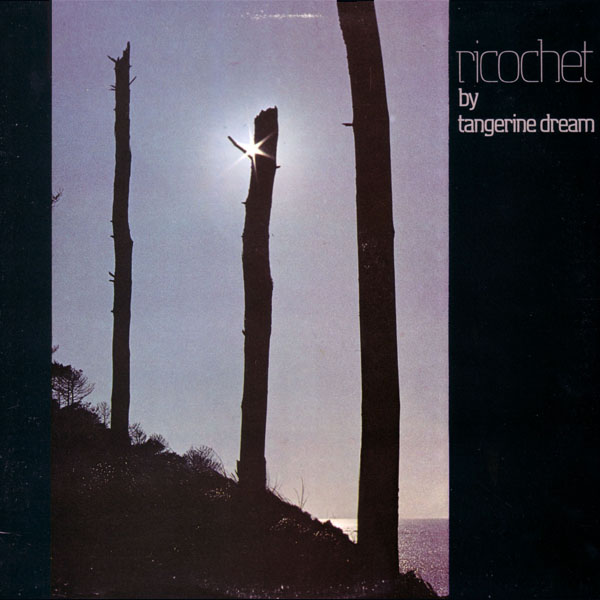 A live album featuring two new sides of music that continue on the same journey as the albums before and after.

I often wondered how Tangerine Dream would reproduce their amorphous tone poems on stage. Ricochet, their first live album, answers the question by avoiding it altogether, instead presenting two sides of completely new music billed simply as Part One and Part Two. In these live shows, Tangerine Dream operate as chemists in a quasi-religious laboratory of their own devising: rows of candles, acid imagery and the trio encased in banks of synthesizers and sequencers, touching keys and twisting knobs, wizards of electronic magic.

As a visual experience, the early TD concerts were a wonder to behold. Beyond some applause at the beginning and end of the performances, however, Ricochet ceases to be anything but the next album from Tangerine Dream. Electronic sounds percolate, patterns shift, loops rise and fall, drums and cymbals come crashing in and listeners strap themselves in for another space journey.

In a developmental sense, Ricochet breaks little new ground, instead returning to the ebb and flow of electronica until a new organism should come bubbling out of it as an “Invisible Limits” or “Madrigal Meridian.” Part One is the darker of the two pieces, a deep space trip in the vicinity of Phaedra. Part Two is brighter and features a tighter pattern of sequencers, similar to the music that followed Rubycon and on. Some have championed Ricochet as one their best efforts, but I’ve always heard this as simply a swatch of the broader, classic canvas.

In 2019, Steven Wilson remixed the album, and those tracks were presented alongside the originals in an expanded reissue. I would imagine this version with the Wilson remixes, and not the 1995 remaster, is the true “definitive edition” to own.