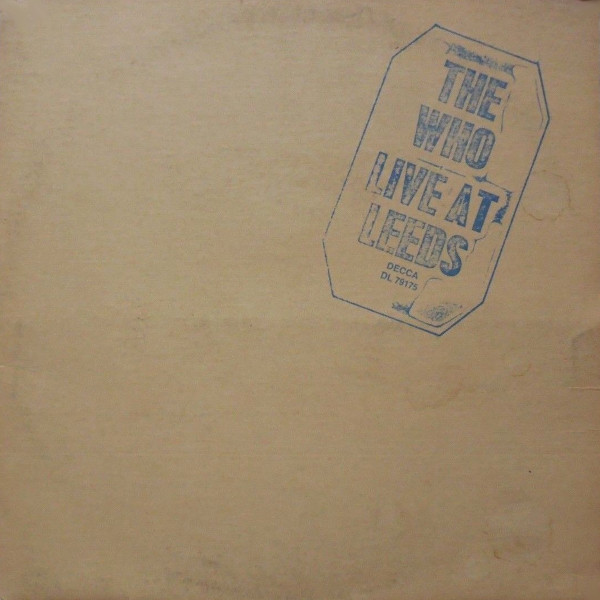 One of the greatest, loudest live albums of its era, not to mention one of the most creatively packaged.

The Who were the smartest rock & roll band in the world. That was the subtext of Tommy. Live At Leeds had a different purpose: to establish that The Who were also the loudest. Recorded at the University of Leeds on Valentine’s Day, the original concert was a chatty affair, an evening with the auteur (Pete Townshend) and his jester (Keith Moon). The setlist was surprising, including quite a few old R&B chestnuts. The concert also featured little of Tommy, but found time for a full staging of “A Quick One, While He’s Away.” Subsequent reissues of Live At Leeds presented the full concert, which gives a very different impression than the original, edited elpee version: a forty-minute blitzkrieg of maximum rock and roll that stood as one of the loudest, heaviest concerts on record.

When The Who knocked Deep Purple out of the Guinness Book of World Records in the mid seventies for the title of the loudest band on earth, it affirmed what the listeners of Live At Leeds already knew. The original elpee was also one of the most creatively packaged live albums, being presented in a folder cover with no less than a dozen separate inserts including various letters and concert receipts. At first glance, the album seemed silas stingy; I imagine Lou Reed fans felt the same when they first viewed the track listing of Rock n Roll Animal.

Once the needle hit those black grooves, however, listeners were blown away with explosive performances. If the original version of “My Generation” was a thrown gauntlet to the older generation, their live version of “Young Man Blues” was a live grenade. A quick version of “Substitute” sweetens things up before the band launches into two more frontal sonic attacks, Eddie Cochran’s “Summertime Blues” and Johnny Kidd’s “Shakin’ All Over.” Townshend’s intent may have been to pay honor to the past or to revise it, I don’t know, but the whole thing smacks of revolution.

The second side features two extended medleys centered around “My Generation,” which features parts of Tommy, and “The Magic Bus.” They’re exponentially louder than the originals, with the guitar, bass, drums and vocals all in overdrive. In fact, I would tell you that John Entwistle and Keith Moon achieve the impossible here, creaming the rhythm section of Cream in energy and ability. Townshend also does his best talking with a guitar in hands, conceding nothing to the top guitarists (Eric Clapton, Jimmy Page) of the day. Despite the additional material, the expanded concert version is actually less impressive; the original version distilled its power better. You’ll probably need to buy both: the first because it’s one of the greatest, loudest live albums ever, the second because The Who were one of the greatest rock and roll bands, period.