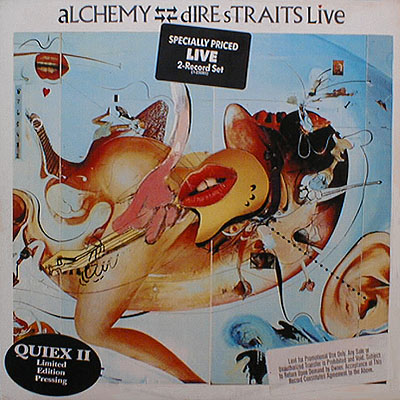 Mark Knopfler and his band recorded live at the Hammersmith Odeon during the Love Over Gold tour.

The line on the band’s first live album isn’t a matter of chemistry but simple math: ten songs divided over two records equals a series of small musical marathons. “Sultans of Swing” is now over ten minutes long; “Tunnel of Love,” nearly fifteen. And then there are the issues that most live albums face: performances that are never quite as crisp as your remember, the same dozen idiots whooping and hollering all evening like they’re at a rodeo. Some people seem to really appreciate Alchemy, and there’s no doubt that the ticketholders at the Hammersmith Odeon were satisfied, but I would tell you that Alchemy can wait until you’ve acquired the proper studio albums. Then again, I don’t like live albums in general, so if you do, feel free to invert my advice.

Withers are thou bound, brother?

While we’re on the subject of chemistry, Dire Straits seemed to be losing original members at a dire rate. Original drummer Pick Withers left after the recording of Love Over Gold, replaced now by veteran session drumer Terry Williams (Rockpile, etc.), and the group that appears on stage here bears little resemblance to the original sultans of swing. Hal Lindes and Alan Clark had only recently joined the band, while saxophonist Mel Collins makes his first recorded appearance with them here. Maybe that will tarnish the nostalgia of hearing them play “Sultans of Swing” for you, maybe not.

A collection of great dance songs

One of the first things you notice about Alchemy is the mood: pensive, heavy, with lengthy synthesizer introductions, it feels at times like a Pink Floyd concert. This is, presumably, a carryover from Love Over Gold and the addition of two new musicians (Clark, Lindes) to the equation, which re-shaped the sound of Dire Straits. You hear this especially on two of the longest performances, “Once Upon A Time In The West” and “Private Investigations.” The other track from their recent album, “Love Over Gold,” is better than I remember, the songs from Making Movies not so much, although the band does a flawless job on “Tunnel of Love.” Also included on this tour is “Two Young Lovers,” a likeable enough (if light) rocker that seems to date from the Love Over Gold sessions and is unique to this record.

As England’s answer to Bruce Springsteen, Mark Knopfler is a local hero. Unfortunately, there is no E Street Band to match that mythology. Mel Collins does his best to conjure the energy of Clarence Clemons, but he’s a hired hand. Knopfler had already begun to carve out a solo career, and closing Alchemy with “Going Home” makes plain that Mark Knopfler and Dire Straits are the same thing. I’m a sentimentalist who likes to see bands stay together, so Alchemy for me is less about magic and more about the shattering of an illusion. I also don’t have as much skin invested in Dire Straits as some, and will likely never learn all of the words to “Telegraph Road.” I suppose all alchemy is illusion, and what separates believers from non-believers is the need to believe.

All songs written by Mark Knopfler unless noted.

Original Cassette Version
A1. Once Upon A Time In The West
A2. Expresso Love
A3. Private Investigations
A4. Sultans of Swing
A5. Romeo And Juliet
B1. Two Young Lovers
B2. Intro: The Carousel Waltz
B3. Tunnel of Love
B4. Telegraph Road
B5. Solid Rock
B6. Going Home

2CD Version
A1. Once Upon A Time In The West
A2. Expresso Love
A3. Romeo And Juliet
A4. Love Over Gold
A5. Private Investigations
A6. Sultans of Swing
B1. Two Young Lovers
B2. Tunnel of Love
B3. Telegraph Road
B4. Solid Rock
B5. Going Home – Theme From “Local Hero”