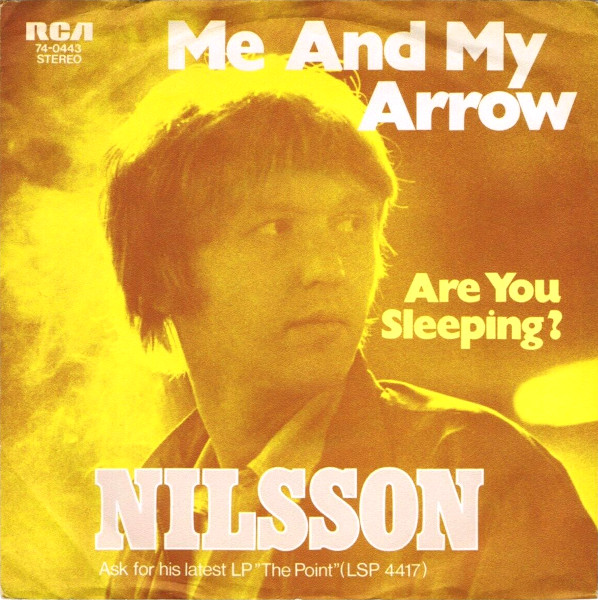 A song so good, it made driving a Plymouth Arrow seem cool. For thirty seconds, anyway.

I’ve never subscribed to the theory that a survival instinct is hot-wired into every human being. I, for example, don’t have a survival instinct. Presented with life-threatening danger, I would probably hide under a blanket. I think of it as an escape instinct. I’m not interested in preserving my life so much as escaping the symptoms of it: boredom, pain, humiliation, fear, etc. As I see it, most of humanity’s pursuits center on alleviating these symptoms rather than prolonging a carousel ride of calamities, insecurities and infirmities.

It’s not exactly the introductory paragraph you might expect in a discussion of Nilsson’s Me And My Arrow, but there’s a point to this. Nilsson was a master escape artist. Creating a cartoon version of a world where evil manifests itself as nothing more than petty jealousies, kings are kind-hearted and feeble, authorities and businessmen are debunked as fools, and a boy and his dog might wander alone into the world and suffer nothing more serious than a swarm of bees is a form of escaping from a very different world. We gain money to escape hunger and fear. We marry and have children to escape loneliness. We crave power to escape meaninglessness. We watch television to escape boredom. We drink and do drugs to escape everything. And we listen to music to escape the banality of our own human condition. (The universal belief in an afterlife is the ultimate escape hatch, although as a Christian I believe it’s one that God intended us to use.)

Nilsson’s The Point is a wonderful place to escape to. Watching it on television as a kid is one of the fonder memories I have. I don’t have many memories of my past, which I suspect has something to do with the way my brain is wired, but I do have a few dozen childhood memories and cartoon movies make up a pretty substantial portion of them: The Point; The Incredible, Indelible, Magical, Physical Mystery Trip; Yellow Submarine; Gay Purr-ee; A Man Called Flintstone; Rikki-Tikki-Tavi; Fantastic Planet. I used to go to bed at night wishing I could wake up in a cartoon world.

But enough of my bitter ruminations. This single was the only one released from Nilsson’s soundtrack to The Point. Both songs are identical to the elpee versions. The songs on The Point, though pitched as a children’s story, are in some cases love songs masquerading as a sequence of events in the plot. Both “Me And My Arrow” and Are You Sleeping?, for example, were clearly written from the perspective of a man and a woman in a relationship. They’re also two of the best songs from the soundtrack, so I’m thankful that Nilsson found a way to squeeze them into the story anyway.

In the UK, an Oxford comma somehow slipped into the title, becoming “Me, And My Arrow.”