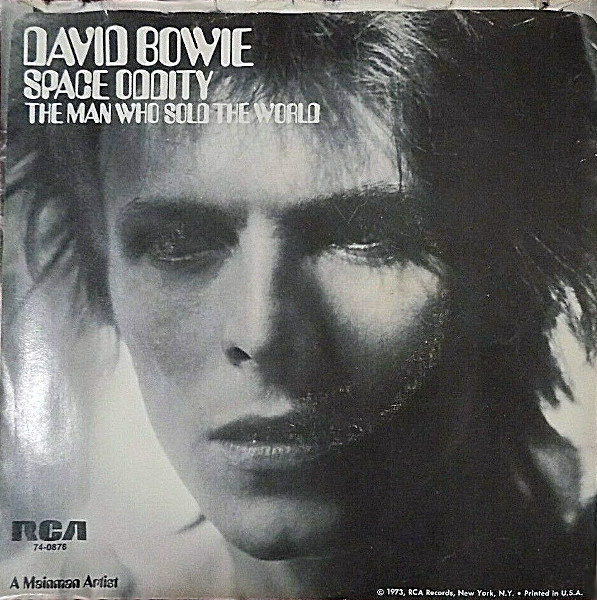 The Stylophone’s greatest moment. And Bowie’s too, at the time, though he’d stick around a bit longer.

Kronomyth 1.9: One giant leap for mankind.

Being a young David Bowie fan familiar with the song “Space Oddity” in legend only, I brought this single home from the store one day and waited patiently for the solitude of night to unlock its secrets. I can still remember pressing my ear against the speaker and drinking the song’s strange magic in like some extraterrestrial oxygen, amazed that the artist had once again cleared the impossibly high expectations I held for him.

This magical moment, by the way, was delivered courtesy of an all-in-one stereo system produced by the likely long-defunct Lennox company, and featured no less than a cassette player/recorder, three-speed turntable, 8-track player and AM/FM receiver within its modest frame. This, back in the days when consumers confused innovation with utility, before innovation became synonymous with higher prices, pleasing aesthetic shapes and unboxing experiences. In fact, the standard-bearers of the industrial revolution have done a lovely job of washing their hands from the whole unseemly business of manufacturing altogether, preferring to skim profits from the works of other countries under the guise of distribution, moneylending, paper-pushing and productivity enhancement. (Planet Earth is blue, and there’s nothing I can do.) Like this single itself, we’ve changed from the “Wild Eyed Boy From Freecloud” to “The Man Who Sold The World” and, in time, “Ashes To Ashes.”

It’s worth noting that there are several different versions of “Space Oddity” floating around, from the pre-1969 stardom version (sadly absent of the Stylophone) to a new version recorded for the “Alabama Song” single. The US version was originally an edit with a pretty piss-poor ending. And, of course, there’s the version recorded by Elton John, which he re-named “Rocket Man.”