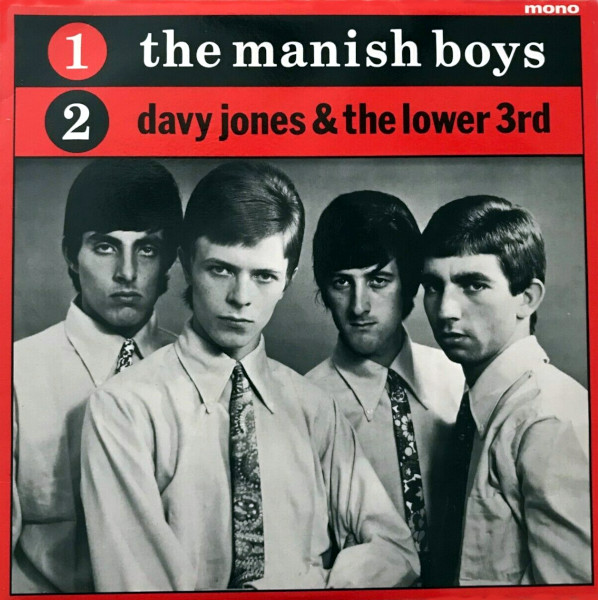 Mister Jones’ first chameleonic pose as a Mick Jagger soundalike on this Parlophone single wasn’t the last time we’d hear from him.

The man who sold millions of records around the world under the name of David Bowie was, of course, born David Jones. Davie (later, Davy) Jones was a chameleon even before he changed his name. By the time he scored his first hit, “Space Oddity,” he had gone through no less than three significant costume changes, including Mick Jagger wannabe, Bob Dylan wannabe and Anthony Newley wannabe. On this, his first recorded single as a member of The Manish Boys (the name of a Muddy Waters song), Mr. Jones does a pretty good impression of early Mick Jagger and pens his first recorded song, “Take My Tip.”

Competition in the English R&B scene was fierce, and in the spring of 1965 it would have taken a lot to get noticed amid the buzz surrounding The Beatles, Rolling Stones, The Kinks, The Who, Moody Blues, Them, etc. “Here Comes The Night” gave you goosebumps. “I Pity The Fool” plods along with a put-upon sneer; even a guitar solo from Jimmy Page can’t save it from its own mediocrity. The flip side, “Take My Tip,” is far more interesting. Written by Jones, it’s still rendered in the style of the Stones but leans to their playful side, as Jones in rapid-fire fashion warns the listener away from a maneater. It’s an early glimpse into Jones/Bowie’s unique vocal phrasings; he may have been trying to copy Jagger, but it’s clear that Bowie was a true original from the very beginning.

Today, the first Manish Boys single is a highly sought-after collectible that’ll cost you a bit of coin. In 1979, EMI re-issued it with the equally collectible single from Bowie’s stint as Davy Jones and the Lower East 3rd as an extended-play single. I’ll tell you, I almost bought the re-issued single several times during the doldrums of the early 80s, when I was literally jonesing for something new from Bowie. I ended up buying the Baal EP, the German/French version of “Heroes,” K-Tel’s Best of Bowie, the Christiane F. soundtrack and the Bowie/Bing Crosby “collaboration” from Bing’s Christmas special. Dark times indeed. Then Let’s Dance was released, and I realized that the dark times were over; the Apocalypse had finally arrived.

Expanded 12-inch reissue version
A1. I Pity The Fool (Deadric Malone)
A2. Take My Tip (Davie Jones)
B1. You’ve Got A Habit of Leaving (Davy Jones)
B2. Baby Loves That Way (Davy Jones)