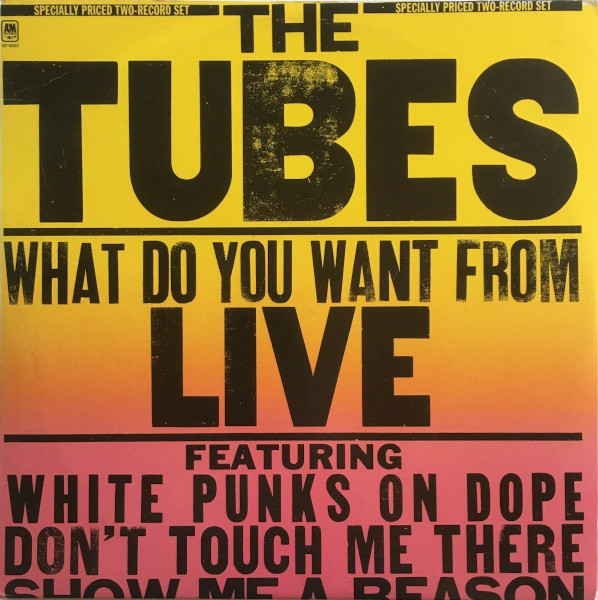 Everything you could want from a Tubes live album, if you wanted one in the first place.

Among the sun-kissed memories of my past are the two odd-dozen 8-tracks I had purchased as a youth, shortly after acquiring an all-in-one Lenoxx stereo system for my birthday. It was a candybox collection for a child: David Bowie, The Moody Blues, ELO, Iggy Pop, Jethro Tull, Eric Clapton, Genesis and, as fate would have it, The Tubes. What Do You Want From Live was my introduction to The Tubes, and it wasn’t long after listening to it that I purchased their first album. Who could resist them after hearing “Boy Crazy,” “Mondo Bondage” and “White Punks On Dope?” In fact, I’m pretty sure I played the fourth track of that cassette (a meaningless reference to anyone under forty) until it broke.

At the time of its release, the concert double-album was a rite of passage for rock bands, beginning with the success of records like Kiss Alive and Frampton Comes Alive. The Tubes might have seemed an unusual choice for the honor, since they weren’t a household name and their last album, Now, had been a commercial and critical disappointment. Their live show, however, had always been a source of strength for the band: an outrageous mixture of spectacle, sarcasm and soft porn. Of course, you would never know any of this from the album cover, which inexplicably appeared as though the real cover had been scrapped at the last minute and replaced with a censored version. (As a band of artists, they were sometimes too smart for their own good.) Once purchased and opened, all was revealed, but you have to wonder how many more copies of this record would have sold if Fee Waybill, Re and the girls had appeared on the cover.

Recorded at the Hammersmith Odeon in London, What Do You Want From Live is both an excellent introduction to The Tubes and a nice supplement to their first three records that includes about half a dozen songs, covers and medleys not available elsewhere. Highlights include songs from the first album, an extended version of “Smoke” that now makes perfect sense and Roger Steen’s “Show Me A Reason.” An honorable mention goes to the Johnny Bugger performance at the end featuring a rip-roaring version of “I Saw Her Standing There” and the original “I Was A Punk Before You Were A Punk.” As a relic from a bygone era, What Do You Want From Live deserves a good remastering with some bonus tracks. Someone, anyone?