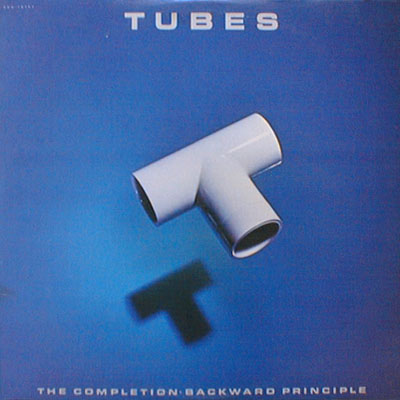 Taking their inspiration from a sales training record, this became their biggest seller to date.

Kronomyth 6.0: The end justifies the means.

Honestly, I tuned out after The Tubes’ second album (I have a short attention span), and tuned back in when I heard “Talk To Ya Later” on the radio. I never liked the song (I was pretty bored with most of the stuff on the radio in the 80s), although I was happy to hear the band cash in on their talent. The Completion Backward Principle benefits from good packaging (the band re-envisioned as a business, which wasn’t much of a stretch at this point) and great production from David Foster, who also cowrote many of the songs. It isn’t a concept album like their last, just a collection of songs that seem to take their inspiration from a bad day of tv programming (are you getting the sense they were watching too much television?): serial killers, giant women, amnesia.

“(David Foster) would always say, ‘Songs have to pay off.’ And we would go, ‘Well what do you mean, pay off?’ He goes, ‘You’ve got to build it up–beginning, middle and end–but at the end you’ve got to come. You’ve gotta pay off. It’s got to make you orgasm at the end.'” — Fee Waybill, recalling the magic of the Completion Backward Principle sessions in a 2019 interview.

The opening is a little tough to swallow, as the band leads with their readymade hit (which was made before most of The Tubes had even shown up in the studio) and the truly tasteless “Sushi Girl.” Fortunately, the likeable “Amnesia” wipes the slate clean and, from there, it’s not so much different than their last record. Bill Spooner’s big ballad, “Don’t Want To Wait Anymore,” is the heart of the album, and would have felt equally at home on the Rundgrenesque Remote Control. “Attack of the Fifty Foot Woman” and “A Matter of Pride” are also highlights. Is The Completion Backward Principle a sellout? The answer probably depends on who you ask. Capitol didn’t bring in David Foster to make another convoluted concept album, yet The Tubes weren’t ready to become Toto 2.0 just yet. That said, lampooning the business side of the music business doesn’t change the fact that The Completion Backward Principle is (good) product.