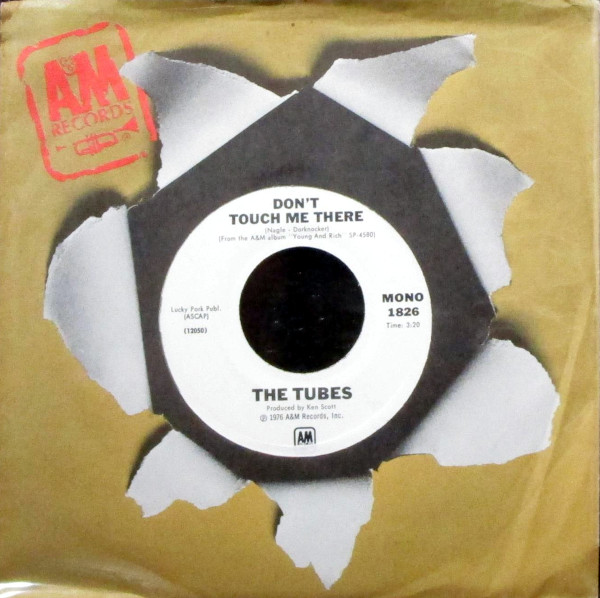 Girls rule on the single from The Tubes’ second album.

Re Styles (born Shirley Macleod) was a peripheral member of The Tubes (dancer, costume designer, hand model on the first two albums) who scored a moment in the spotlight on the duet, Don’t Touch Me There. It may be her finest moment, as she upstages Fee Waybill (no small task) with her voluptuous voice. Written by Ron Nagle and Jane Dornacker (later of Leila and the Snakes), “Don’t Touch Me There” is a clever send-up of the early rock & roll songs like the Shangri-Las “Leader of the Pack.” It’s a shame Dornacker and Styles didn’t do more together.

The B side is Proud To Be An American, a boogie-woogie bicentennial bit that takes a pretty dark turn at the end. Although “subtle” is hardly a word that comes to mind when you think of The Tubes, Spooner’s satire was often subtle. For every over-the-top “White Punks on Dope” was a “Young and Rich” that could be sarcastic yet strangely sympathetic at the same time. On “Proud To Be An American,” the song seems like a celebration of American freedom until you get to the third verse. Before the song is over, the heavy thought of “it’s impossible to give quality and justice to inferior foreigners too jealous to trust us” lets you know where Spooner really stands.

*This was spelled “Dorknocker” on the US release (ouch) and “Doornacker” on the UK release. Nothing like writing your first big hit and no one can spell your name correctly.

Back-to-back hits 7-inch single version
A1. Don’t Touch Me There
B1. Prime Time