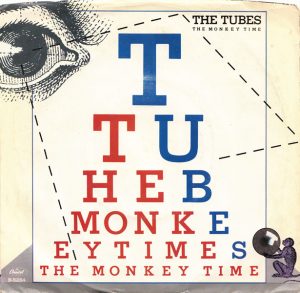 Kronomyth 7.2: MONKEY SEE, MONKEY DUET. If you had told me that Fee Waybill and Martha Davis of The Motels would one day cover an old Major Lance hit written by Curtis Mayfield, I probably would have fallen asleep somewhere around the word “Motels.” No falling asleep during this song, though. It’s a hoot as Martha and the boys dial the wayback machine to Monkey Time and Tubularize it with their groovalicity. There may be some subtle differences between this and the elpee version (e.g., Martha’s voice is given an echo treatment on the single), so stay tuned for that magical day off in the distance when I actually have time to listen to the two versions and compare notes. The B side is a nonalbum track that missed the cut for the majors, but has inexplicably attached itself to two Best Ofs all the same. Go, Tubes, go… figure.