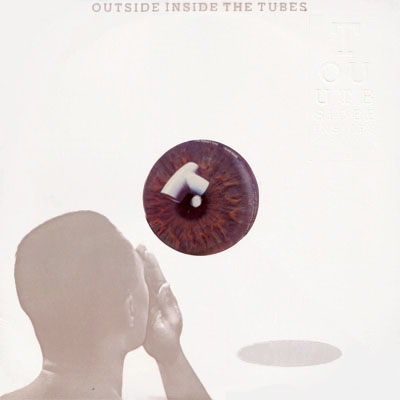 There was no going back now, as The Tubes continued their winning ways with another David Foster-produced smash.

Welcome to U-toto-pia. Population: you and some guy wearing a “Back to the Future” t-shirt. If the two of you are feeling silly, relax. Back to the Future was a great film and Outside Inside is a great album. Not great-for-the-ages great, but great for the eighties.

The Tubes, after all, were not just another band of middle-aged top fortysomethings. They challenged musical normalcy in the beginning, then masked their affection for it in concepts and, finally, embraced it. The Completion Backward Principle marked the beginning of the embracing: “Talk To Ya Later,” “Don’t Want To Wait Anymore.” It worked and the world embraced back. Outside Inside is a second hug, stronger than before. They slip us a kiss with the hits (“She’s a Beauty,” “Tip of My Tongue”), and whisper weird things in our ear but briefly (“Drums,” “Wild Women of Wongo”).

The result was their most successful album, and The Tubes promptly became victims of their own success: Fee Waybill released a solo stinker and their next album bombed. Funny thing is, they sound invincible on Outside Inside. Whether they’re playing Utopian pop or modern R&B, it’s done with such aplomb (that’s right, I wrote “aplomb”) that The Tubes connect on every track. It’s professionally played, probably product, and perpendicular to their past, but a party is a party. Like Utopia, you’ll give yourself a headache trying to connect the dots between “Trapped” and “Mated,” “Mondo Bondage” and “The Monkey Time.” Leave the art-rock baggage at the door, listen to the music and treat your inner monkey right.