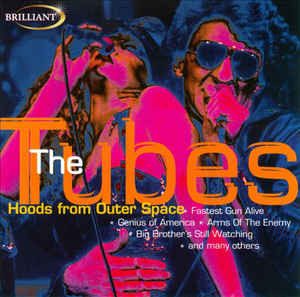 Genius of America was a brilliant comeback album, but Americans didn’t come back in large enough numbers to hear it. The Tubes remained a popular attraction overseas, however, and several years later Genius was re-mixed, expanded and re-packaged as Hoods From Outer Space for European audiences. I remember Genius of America being very good, but I don’t remember it being this good. Either I didn’t give The Tubes enough credit in 1996, or they nailed it with the new mix. Hoods features a different track order and leads off with the two “new” tracks: the raver “Hoods From Outer Space” (which had actually been a part of their live show since 1989) and a readymade hit co-written with Steve Lukather, “I Know You.” For my money, the music on Genius/Hoods is better than anything to come out of the Capitol years; it’s a shame that Bill Spooner missed this party. In explaining how this music could be so much better than the last incarnation of The Tubes, the logical answers are Gary Cambra and time (“Fishhouse” and “Fastest Gun Alive,” for example, were written years before they recorded Genius). Fee Waybill has also made a quantum leap as a songwriter; he’d clearly been reading up on how to be a better songwriter since Read My Lips. Now, The Tubes didn’t create this music in a vacuum; in fact, they borrow quite a few familiar tricks on songs like “Big Brother’s Still Watching” and “Around The World” (shades of Soundgarden’s “Black Hole Sun”). But the high production value and hitmaking machinery don’t detract from The Tubes’ singularly strange worldview. I haven’t listened to Hoods and Genius side by side, so I couldn’t speak to the difference in the mixes, but I’d be inclined to give Hoods the nod as the better disc. I also like the track order on Hoods better; “After All You Said” is a better goodbye than the dark “Around The World.”