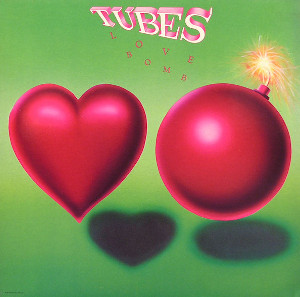 Their last album for a decade, at least they went out with a Bang On The Drum All Day production.

Kronomyth 8.0: How I learned to stop worrying and love The Tubes.

This is the worst record that The Tubes have released. And it’s still pretty good. That last sentence is something of an emotional breakthrough for me. For years, I held genuine antipathy for Love Bomb. (It’s a piece of plastic. I need to get a life.) The production from Todd Rundgren is polarizing. Todd was in sort of a strange place artistically, having released a string of disappointing Utopia albums and the confounding A Capella, so it’s unfair to expect that Love Bomb would become Remote Control Redux.

The album is littered with extraneous sounds, strung together in fragments, plagued by the kind of restless curiosity that presumes a lot of patience on the part of the listener. And the truth is that few people, Tubes fans included, had much use for “Muscle Girls,” “Bora Bora 2000,” “Say Hey” and “Theme From A Wooly Place.” They’re cute ideas, but the sort of thing that should have been left on the editing room floor, not sandwiched in between Rundgrenesque rock ballads. Sift out the strangeness, and Love Bomb is actually a decent record of sophisticated studio rock: “Eyes,” “Piece By Piece,” “Come As You Are.”

Bill Spooner has defended this album in interviews, and I would agree with him (now, anyway). It’s not far removed from the band’s last two records in terms of quality. David Foster reigned in the band’s strangeness, however, where Rundgren seems to feed it. It’s too bad that I didn’t warm up to Love Bomb before I wrote a review of it for All Music Guide. Lord knows it wasn’t a lack of listening to Love Bomb that led to my displeasure. Maybe I listened to it too much, looking for the treasures of the past.

Commercially, the album was a dud; that much is true. Artistically, it’s not the mess I first imagined, although I still have the sense that Todd wanted to turn The Tubes into Utopia Mark II. Yes, it’s still probably the last Tubes album you need to own, but I’ve learned to stop worrying about what it’s not and enjoy it for what it is.

“It sucked, pretty much, it really sucked.” – Fee Waybill, explaining the appeal of Love Bomb in a 2001 interview with the San Francisco Herald.