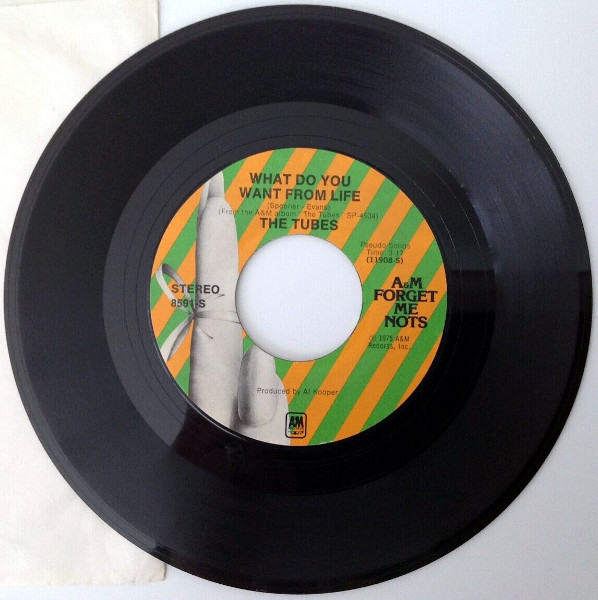 A very different version than what appeared on their first album, with an actual guitar solo and without the funny ending.

The theatrical stagecraft of The Tubes was one of their biggest selling points, and a lot of that came through even as an audio-only experience on their debut album. Radio stations, however, weren’t about to allocate precious minutes to a six-and-a-half-minute “White Punks on Dope” or a bizarre sales pitch that ended with an offer of a baby’s arm holding an apple. And so both tracks were pared down, White Punks nearly by half.

The single version of What Do You Want From Life is radically different from the elpee version and may have been entirely re-recorded. The guitar solo is certainly new and so is the ending, which now features female voices (presumably from Re Styles). In the US, the flip side is the album version of Space Baby. For UK audiences, the single version of White Punks appeared, making it essentially a twofer. Other than editing for dirty words, big chunks of the middle and the ending are excised. Both White Punks and WDYWFL are better experienced on album, in my opinion, although the single does make for a nice Tubes collectible, since I don’t recall seeing these versions anywhere else (and guitar solos on Tubes song are especially rare).