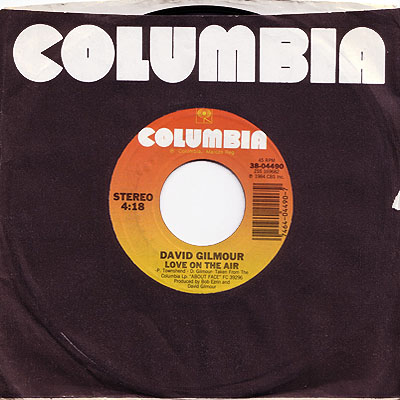 A radio-friendly love song about a love song on the radio, written by The Who’s Pete Townshend.

Kronomyth 2.2: I learned how to sigh on the ribbon and wires.

I read on Floydian Slip that David Gilmour and Pete Townshend met while Pink Floyd was recording The Final Cut in Pete’s Eel Pie Studios. (Gilmour and Townshend had actually appeared together on Paul McCartney’s Back to the Egg, on record anyway, a detail that I’m sure didn’t slip past the aforementioned site.) A collaborative spirit was soon kindled and Pete provided lyrics to two tracks on David’s new album: “All Lovers Are Deranged” and “Love on the Air.” David reciprocated by playing guitar on Pete’s White City.

“Love on the Air” is a likeable track, here left intact from its album length. When Gilmour sings “I was looking for love in wandering eyes like a ship trying to fix on a beacon,” he has me in his hands. The very next line, he drops the awkward “It’s a habit that’s so hard to weaken,” and me with it. In the US, “Near the End” was the B side (again identical to the elpee version), and most Floyd fans should agree this is the better track. In fact, sounding as it does like a lost cut from Final, it may be the closest Gilmour has come so far to sounding like Pink Floyd.

A1. Love On The Air
B1. Let’s Get Metaphysical