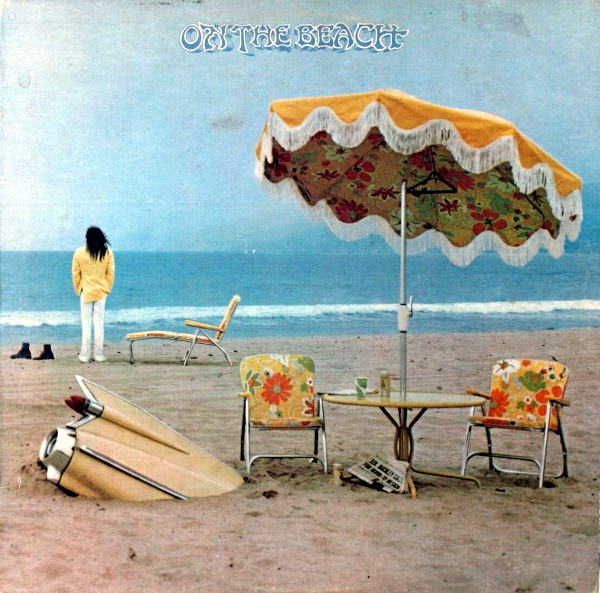 On this powerful followup to Harvest, Neil Young pulls off the road and examines the cost of stardom.

Neil Young’s followup to the brilliant Harvest was the raw, ragged Tonight’s the Night. That album was temporarily shelved, however, and audiences were served On the Beach instead. Some have viewed the three post-Harvest albums (which includes the live Time Fades Away) as both a trilogy of despair and denial as Young counted the costs of his own stardom. Ironically, Young’s apparent rejection of his rock-star status only fueled the mythology around the man. At various times, all three post-Harvest albums have been referred to as his best album.

On the Beach is not Neil Young’s best album. It is the best of the trilogy that came after Harvest, at times powerfully poignant (Ambulance Blues) and unrepentantly vicious (Vampire Blues, Revolution Blues). It may also be his most quotable album. “Some get strong, some get strange” (from Walk On), “I won’t deceive you, I just don’t believe you” (“Revolution Blues”), “I need a crowd of people but I can’t face them day to day” (from On the Beach) and “You’re all just pissin’ in the wind” (“Ambulance Blues”) are the kind of lines that stay with you for a lifetime.

Initially, Young had intended the songs on side two to start the album. The label decided it needed a brighter start (enter “Walk On”), but the 8-track and cassette versions reverted to Young’s original plan. Personally, I think “Walk On” sets the listener up for a pop album that never arrives, although I do like ending the album on “Ambulance Blues.” I suppose it’s only fitting that a world that can’t agree on Neil Young’s best album couldn’t agree on the track order for one of his best albums either.

Despite the dire subject matter of On the Beach, it’s one of his most tuneful records. Neil’s voice appears mellowed by maturity or melancholy or both, the arrangements are surprisingly musical (Ben Keith deserves much of the credit, especially on For the Turnstiles, which is essentially a duet) and the crankiness is kept to a minimum (save for an awesomely half-assed guitar solo on “Vampire Blues”).

Oddly, the album I keep coming back to when I hear this isn’t something by Neil Young, but Pink Floyd’s Wish You Were Here. The last two songs, Motion Pictures and “Ambulance Blues,” capture the same world-weary spirit as “Wish You Were Here,” and maybe the people we’ve lost evoke the same mood. The idea of there being a universal experience in our pain isn’t so crazy. In fact, it’s at the very heart of what makes On the Beach such a powerful record. I don’t know what it’s like to lose close friends and gain the world at the same time, but I know how it feels when I listen to these songs. So, while it may not be his best album, it’s probably the closest we’ll ever come to being Neil Young.

All selections written by Neil Young.

Original cassette version
A1. On the Beach
A2. Motion Pictures
A3. Ambulance Blues
B1. Walk On
B2. See the Sky About to Rain
B3. Revolution Blues
B4. For the Turnstiles
B5. Vampire Blues