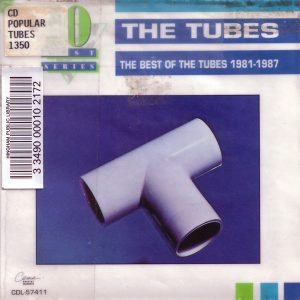 Kronomyth 9.3: COMPLETELY OUTSIDE THE BEST OF THE TUBES. If I had to make a career choice between working as a musical archivist for Capitol’s Special Markets division or scraping caked-on vomit from the walls of Hell’s torture chambers with a rusty fork, the decision would probably come down to the quality of the dental plan, such is my distaste for CEMA’s duplicitous doings. First of all, this isn’t the best of anything but two albums: The Completion Backwards Principle and Outside Inside. In other words, The Best of The Tubes 1981-1983, at which point their best music lay well behind them. Nothing from 1985’s Love Bomb is included and, while I never imagined I would be in a position to defend that album, surely “Piece By Piece” or “Eyes” would have been better than the nonalbum B side “Sports Fans,” a song that has the rare distinction of being the worst idea on an album that already contains “Sushi Girl.” The rest of the choices are solid given the narrow view: “Talk To You Later,” “She’s a Beauty,” “Tip of My Tongue,” “Don’t Want To Wait Anymore,” “Attack of the Fifty-Foot Woman.” Of course, the nefarious agents of CEMA have limited this to ten tracks, part of their shameless “10 Best Series,” which would seem to promise that someone, somewhere, took the trouble to distill the band’s best ten songs as opposed to, say, throwing a dart at the back of two album covers and tacking on a nonalbum B side to entice fans. As infernal pukescraping gigs are apparently hard to come by, idle hands have also issued The Best of The Tubes in 1992, Attack of the Tubes in 1993 and Extended Versions in 2001 (which I actually bought, but then I’m kind of a glutton for punishment).