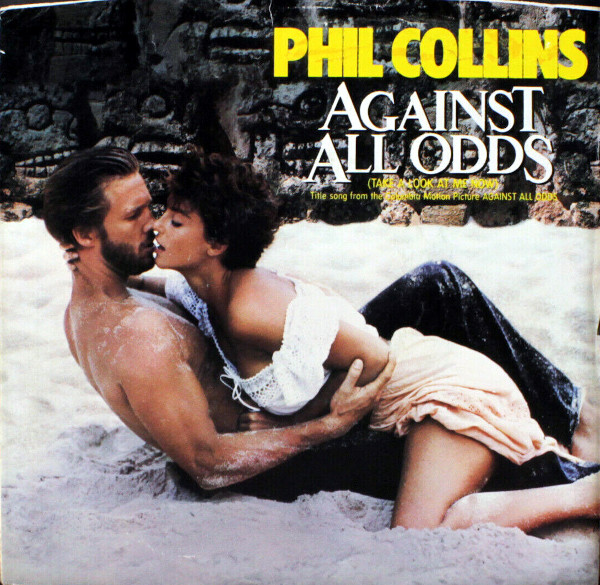 Nominated for an Academy Award, this song also managed to top the US charts.

I’ve never watched the film, Against All Odds. In fact, I couldn’t even make it through the first three minutes of the music video. My interest in movies is in direct proportion to the likelihood that a zombie will jump out and eat someone’s face and, while it seems like there was a lot of face eating in this movie, I didn’t foresee any zombies.

Speaking of faces, I was growing a bit tired at this point of seeing Phil Collins’ everywhere. I won’t deny that Take a Look at Me Now is a great ballad. I’ll even forgive him the re-use of the drum intro at the minute-and-a-half mark (cf. “In the Air Tonight”). But that we’ve crossed over into MOR territory is clear. And Phil as the wronged lover was wearing a bit thin too.

In most regions, Atlantic tossed the main title from Against All Odds on the B side. Credited to Michel Colombier and Larry Carlton, The Search is pretty lame even as soundtrack music goes, and not nearly memorable enough for a main title (think Miami Vice with Spanish guitar, or better yet…). In the UK, Mike Rutherford’s Making a Big Mistake, which also appeared on the movie soundtrack, was the flip side. It’s not bad as Mike Rutherford songs go and is more or less in line with the Mike + the Mechanics music he would soon be making.

Produced by Arif Mardin (A1), Larry Carlton and Michel Colombier (B1), Mike Rutherford (B1 UK).