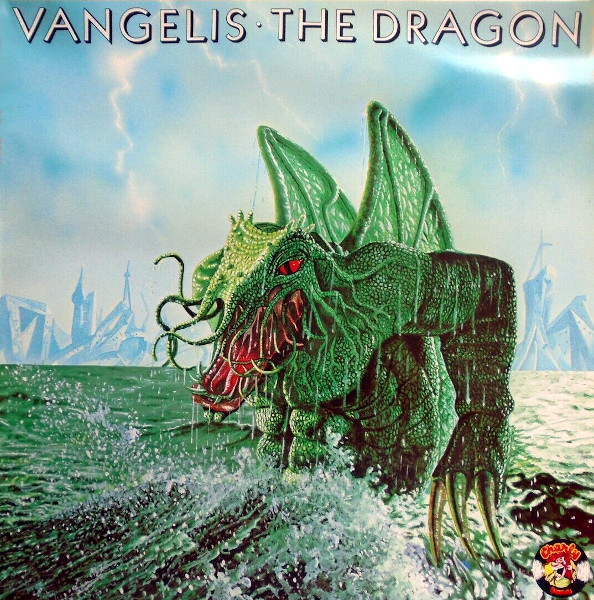 Kronomyth 6.6: Stop dragon my art around.

If memory serves, I bought Hypothesis and The Dragon on the same day. The first was a disappointment, but I ended up putting The Dragon on the turntable with some frequency. It’s not Vangelis’ best stuff by a longshot, but it’s the sort of record you can have playing in the background and tune into at various points without recoiling in horror.

Recorded in 1971, these sessions featuring an expanded lineup that included Aphrodite’s Child guitarist Anargyros Koulouris (here billed as “Arghiris”) and the popular session drummer Micky Waller. The Dragon consumes the first side of the record: a trance-like jam that was originally intended to capture some of the mysticism of Sufism. The song has a pronounced Middle Eastern feel (Arghiris is credited with guitar, but it rarely sounds like he’s playing one), though at other times it sounds like some of Frank Zappa’s jams, particularly when Michel Ripoche’s violin features prominently in the mix. All in all, interesting stuff, although it doesn’t really go anywhere for fifteen minutes.

Stuffed Aubergine features harpsichord-like tones and is the most overtly psychedelic track on the album, suggesting a sort of acid-inspired dream – just the sort of thing that would have felt at home on Pink Floyd’s soundtrack to More. It’s a mellow place for your mind to hang out, though it seems to be edited form a longer jam (you can hear the whole thing kind of fall apart in the fade). Stuffed Tomato starts with an intro from Arghiris (think “Dueling Bouzoukis”) before diving into a pretty impressive prog riff, though again it unravels at the end. It’s an interesting track that again offers a glimpse into what might have been if Vangelis had joined Yes.

I can understand why Vangelis didn’t care for Hypothesis, but it would be sad to think The Dragon lost to time if someone hadn’t recorded it. You don’t need to pick up either album unless you’re a fan/collector, though I’d enter The Dragon long before venturing into Patrick Moraz’ Future Memories.

All songs written by Vangelis.