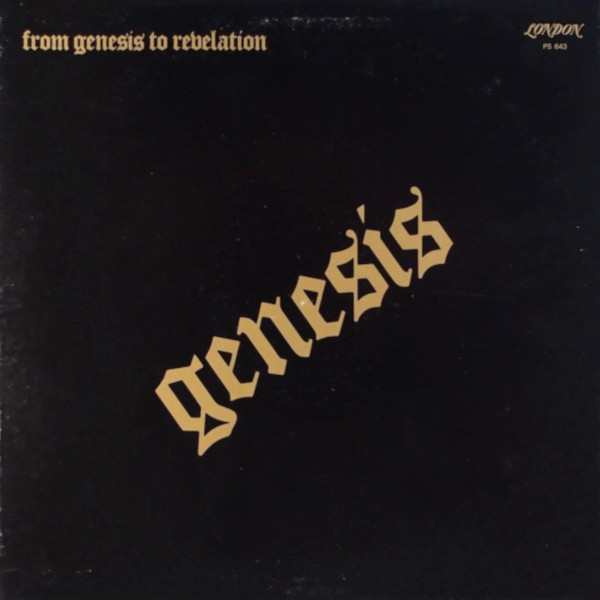 The first Genesis album is the Leviticus of the lot: instructional, but not particularly enjoyable.

Genesis were discovered while schoolboys by fellow Charterhouse School alumnus Jonathan King and, in truth, they were still schoolboys when they recorded their first elpee, From Genesis To Revelation. Most Genesis fans have encountered these juvenile adventures in one guise or another, quickly followed by the shocking realization that their first album sounds very different from the complex progressive rock that followed. (For more on this phenomenon, see David Bowie’s eponymous debut from 1967.)

The original batch of songs wasn’t bad (cf. “The Serpent,” “The Conqueror”), but Jonathan King bungled the affair by bringing in Arthur Greenslade to add strings and horns to the final mix. The result, unfortunately, sounds like the score to a Rankin/Bass stop-motion holiday adaptation of the bible. As for the biblical theme, the band has since conceded that it was a conceptual crutch to help them write material rather than an attempt to present the bible in music, and that many of the songs already existed in one form or another before entering the studio.

Under more natural circumstances, the band would have allowed these songs to fully bake in live performances. Instead, what came out of the studio sessions were half-baked ideas with cloying orchestration smothered on top. The original mix is also terrible, with Peter Gabriel’s voice drowning out nearly everything else including Anthony Phillips’ electric guitar solos. All that said, I’ve listened to these songs no less than a hundred times, and while I would never recommend getting stoned to this record, it is oddly pleasing after a while. Over the years, the songs arrive as old friends: “In Hiding,” “Where The Sour Turns To Sweet,” “Am I Very Wrong,” “Silent Sun,” “One Day.” It would be wonderful if the band revisited these songs some day, but so far as I know they’ve remained untouched.

Note that these songs have been repackaged many times, often with the band’s early singles interspersed, and released in what appears to be a definitive three-elpee box set by the suitably-named Not Bad Records.

All songs written by Genesis.