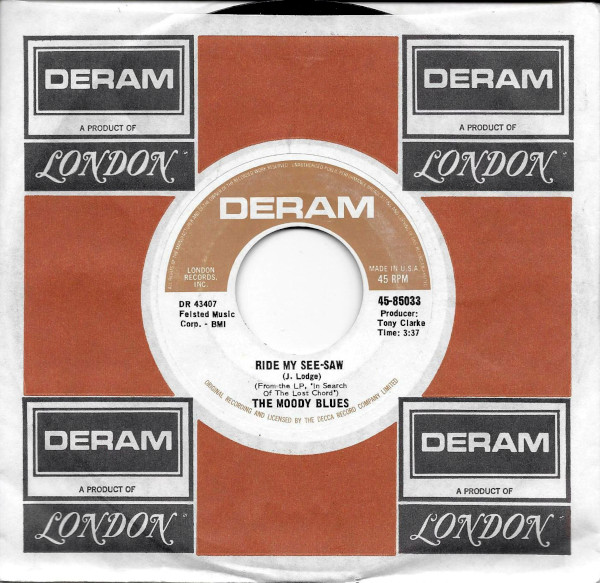 John Lodge takes a short ride up the charts with this spirited opener from the Moodies’ third.

John Lodge wrote some of the Moodies’ heaviest rock tracks. There was the noisy “Peak Hour” from Days of Future Passed and, here, “Ride My See-Saw” from In Search of the Lost Chord. Hearing Graeme Edge’s “Departure” careen into “Ride My See-Saw” is one of those indelible moments in the Moodies’ history. The single version is edited and features (presumably) Graeme counting off the beat at the beginning. As John’s first big single for the band, “Ride My See-Saw” marks the official beginning of the Lodge/Hayward era of hitmaking.

In the US, Justin Hayward’s “Voices In The Sky” was released as the B side, a song that had actually been selected as the advance single in the UK. It’s a song so fragile that it threatens to blow away, yet stays with the listener long after. Very few singers could have pulled this off, and “Voices In The Sky” is a great example of what makes Hayward such a unique artist. In the UK, a nonalbum track from Mike Pinder, “A Simple Game,” was selected as the B side. Pinder’s track aligns with the psychedelic movement and has some wild guitar and mellotron parts in its arrangement. With Pinder, you never knew what to expect, but you could always count on it being exciting and different. Apparently, a version of this exists with Justin Hayward singing; both versions appear on the expanded remasters of In Search of the Lost Chord.