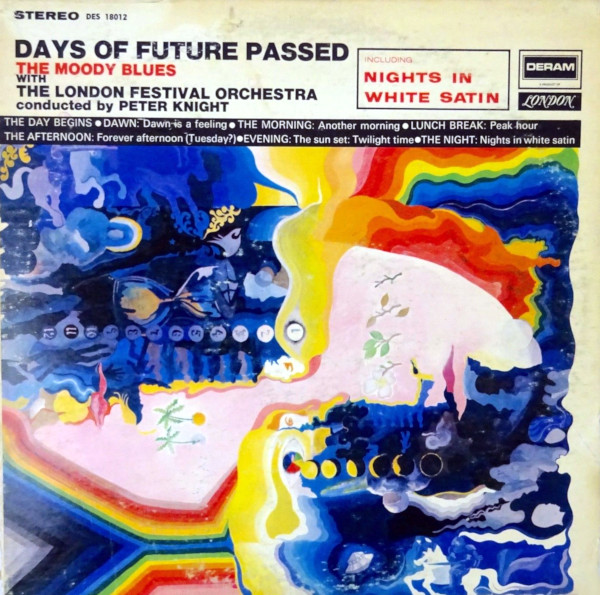 Originally conceived as a stereo demo record, the first “classical” rock album raised the bar even higher than The Beatles.

Kronomyth 2.0: As different from the past as Knight and Days.

1967 was a watershed moment in pop music, as the broad horizons of the post-Pet Sounds landscape beckoned to bands like The Beatles, The Moody Blues, Pink Floyd, The Rolling Stones and many others. Each went off in their own directions, Pink Floyd in pursuit of the ultimate sonic acid splash, The Beatles to perfect Britpop in the studio, and the Moodies to make a classical pop record. (The Stones, for their part, tripped and took a noisy tumble down the hill.)

While the artistry of Days of Future Passed is undeniable, the psychedelic precocity of its intent has left a patina that obscures some of the fine handiwork involved in its painstaking fabrication. The London Festival Orchestra, conducted by Peter Knight, might have been the subtle salting needed to bring these songs a better flavor, but mostly it places the Moodies in Pepperland (for those of you who remember George Martin’s score to the animated film, Yellow Submarine). The spoken poetry, introduced here for the first time, is the height of pretension, invoking Helios in a Homeric summoning of the dawn as if the sun shined out of their arts. And yet, it’s this ambitious pretense to music as classical art that makes Days so compelling.

Much of what the Moodies reach for is simply beyond their grasp; “Dawn Is A Feeling” and “Another Morning” are mawkish attempts to merge classical and pop themes. But no amount of failure can diminish the album’s great achievement: “Nights In White Satin.” This was, and remains, one of pop music’s most sublime victories, invoking a majesty that elevated the medium in an instant from popular voice to artistic expression. Not to be overlooked is “Forever Afternoon (Tuesday?),” which achieved much the same effect as Nights without the strings. The remainder of the record has its moments, “Peak Hour” (which always reminds me of The Who) and “Twilight Time” among them.

At this early stage, Justin Hayward’s songs carry the day, while John Lodge, Mike Pinder and Ray Thomas search for a suitable muse. That would all be in the past, however, as the Moodies looked forward to a new future where each songwriter found their own voice. It was indeed a new day dawning for the Moodies and for pop music in general. Not bad for a day’s work.

All orchestral music composed by Redwave-Knight.