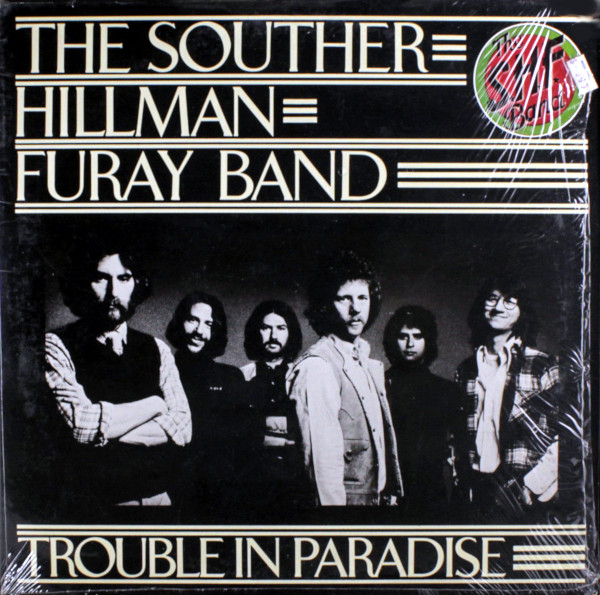 A half-hearted followup to the first, featuring a third of an album from each.

The SHF Band was never a supergroup, not even a band, really. It was a marriage of convenience, of shared musical sympathies and commercial interests, but no one would ever confuse them with the second coming of Crosby, Stills and Nash. For Chris Hillman and Richie Furay, the alliance was also a stepping stone between playing in a group and stepping out as a solo artist, which both men did the following year in 1976. I remember reading in an interview with Chris Hillman that he felt each member was holding back their best songs for their own albums, and Trouble In Paradise would seem to bear that out, particularly in Hillman’s case.

The album is laid out logically, if too literally, with a track each from Souther, Hillman and Furay in that order. The trouble begins with “Trouble In Paradise,” an open complaint about the star-maker machinery (“Now you wanna make me a hero, put me in a shiny suit”). Never a good sign, that (if we learned nothing else from George Harrison’s “Blood From A Clone”). Hillman seems to want to distance himself as well from the rockstar scene on “Move Me Real Slow,” while Furay’s “For Someone I Love” is about his broken marriage. A few more songs like that, and the whole stardom problem would take care of itself.

Trouble In Paradise does get better. Furay’s “On The Line” is one of the prettiest things he’s written (although I seem to be in the minority here), and would have been my choice for the album’s single. “Somebody Must Be Wrong” is also worth hearing for the harmonies of Don Henley and Glenn Frey. I’ve always wondered what Souther would have sounded like as a member of Eagles. Honestly, I thought it would sound better than this, but at least that’s one less nagging “what if” to consider.

Despite the valiant efforts of producer Tom Dowd and the rest of the SHF Band, this sort of enterprise only works when the B stars bring their A game. Trouble In Paradise is a middle-of-the-road country-rock album by mid-tier stars who rarely meet in the middle where it matters most, in the music itself. There are some half-hearted harmonies from the trio, but Paul Harris and Al Perkins seem to care more about the music than the band’s namesakes. Credit Souther, Hillman and Furay for recognizing that the venture had run its course, and fault Asylum for letting dollar signs get in the way of common sense.

“Toward the middle of (Trouble In Paradise), we knew we weren’t going on the road, so . . . being quite honest with you, I just didn’t bring out a couple of my songs. I think the other guys did the same thing.” – Chris Hillman, in a 1976 Rolling Stone interview.