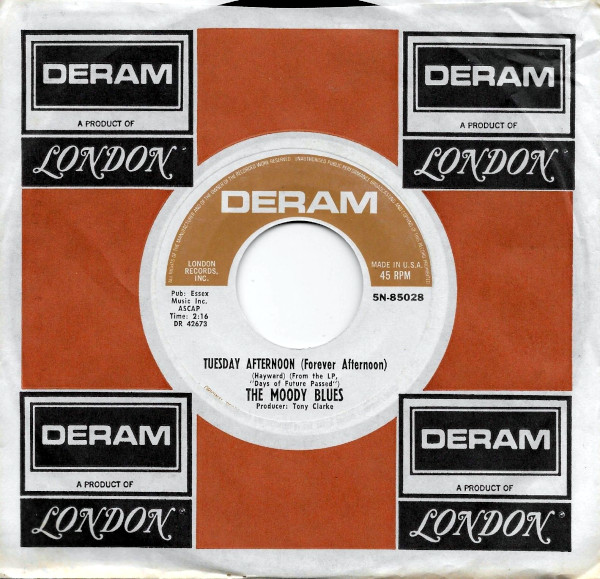 The second single from Days of Future Passed is another classic in the Moodies’ canon.

Kronomyth 2.2: Another day in the life.

Just as Days of Future Passed was disappearing from the charts in the Summer of 1968, Deram released Tuesday Afternoon as a single--mere weeks before the Moodies’ next album, In Search of the Lost Chord. As a result, its success in the US drowned out “Voices in the Sky,” although I’ll take “Tuesday Afternoon” any day. The song is essentially Justin Hayward’s rewrite of The Beatles’ “A Day in the Life,” even down to its influence (both appear to have been inspired by a smoke), with some brilliant accompaniment from Mike Pinder and John Lodge. (Pinder would revisit the idea of copping the Sergeant’s final track on “Have You Heard.”) The fade is awkward, since the song wasn’t originally mixed as a standalone piece, but it’s two minute of sunlit heaven nonetheless.

The B side is Ray Thomas’ Another Morning, one of his typically childlike works and featuring a very different musical arrangement from the band, with Thomas’ flute prominent in the mix, playing the role of Pied Piper in residence. There is some conjecture as to when this single was released; most ascribe it to May through July. The single is first referenced in the July 1, 1968 issue of Billboard and reached the lower charts (#138) the following week, so I’m guessing June, on a Tuesday.