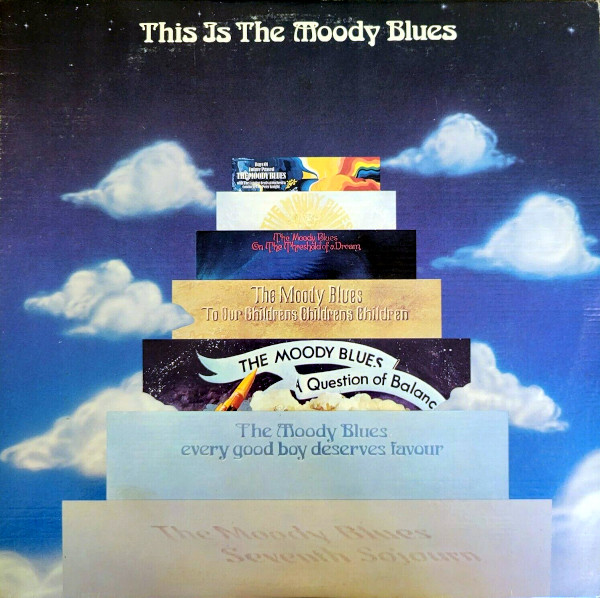 Maybe all the Moody Blues you’ll ever need, although I dare you to resist buying more after hearing this.

Kronomyth 9.0: A look down life’s hallways.

This was released during The Moody Blues’ mid 70s hiatus, a double-album compilation featuring their classic material from Days of Future Passed through Seventh Sojourn. Remembering for the moment that Apple had just released two double-elpee compilations of The Beatles – the successful red and blue albums – Threshold rightly reckoned that audiences would snap up a double helping of The Moody Blues too.

This Is The Moody Blues, like The Beatles albums before it, is a nearly flawless collection of the band’s best music. In addition to the hits, you also get some of their most memorable album moments: The Dream and both halves of Have You Heard wrapped around The Voyage, In the Beginning leading into Lovely to See You and For My Lady among them. There’s even a nonalbum B side, Simple Game, included in the mix. By keeping the original albums’ continuity, the experience of listening to This Is The Moody Blues is like reliving the best moments from their albums rather than just a cavalcade of hits.

To hear this from beginning to end is to stroll through one of the greatest musical exhibits of the twentieth century. Graeme Edge’s poetry, Ray Thomas’ balladry, John Lodge’s rock songs, Mike Pinder’s orchestral touches and the brilliant songcraft of Justin Hayward all find equal balance here. As later Moodies compilations proved, it’s not simply a matter of collecting their hits and letting the music speak for itself. The music of The Moodies is a work of gossamer and granite, and needs to be presented with a discerning eye to both. There is a proper place for poetry, pop music and progressive rock in the Moodies’ body, and This Is The Moody Blues finds them. Despite the fact that the band continued to release great music after this (e.g., “Driftwood,” “The Voice”), I wouldn’t trade a single song on here (okay, maybe Melancholy Man) for what came after.