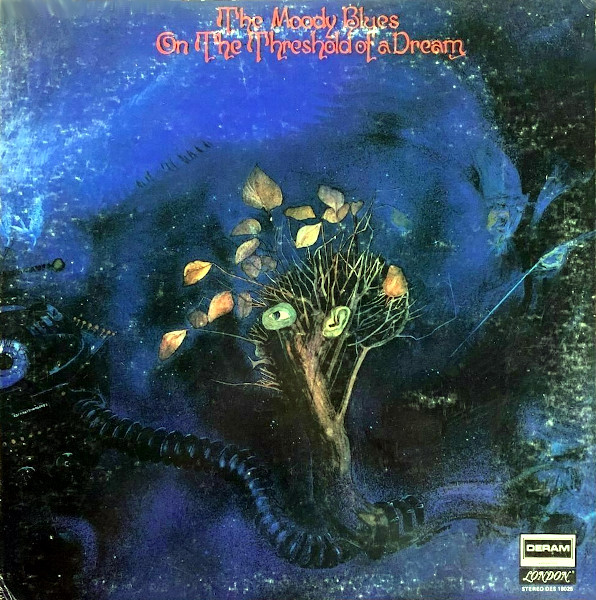 The Moodies cross the threshold of greatness with their first #1 album, and their first to feature synthesizers.

Kronomyth 4.0: You’ll want to be sitting comfortably for this voyage.

Their last album, In Search of the Lost Chord, was a trippy affair: “Legend of a Mind,” The House of Four Doors,” “Om.” On the Threshold of Dream goes even deeper in its search of the ultimate headphone experience, featuring one of the earliest uses of the EMS VCS 3 synthesizer along with cellos, mellotrons, flutes and what was some very sophisticated engineering for its time. Patterned after The Beatles’ recent albums (Sgt. Pepper’s Lonely Hearts Club Band, Magical Mystery Tour), Dream wasn’t a concept album, but a collection of songs conceived as an album experience. The album did remarkably well on the charts, reaching #1 in the UK and going gold in the US on the same day as Days of Future Passed. Truly, we had reached the golden age of The Moody Blues.

On closer inspection, not every song on Dream works. Send Me No Wine, Lazy Day and So Deep Within You are hardly the best ideas to come from the respective minds of John Lodge, Ray Thomas and Mike Pinder. But Graeme Edge sounds positively brilliant on this record, Never Comes The Day and Are You Sitting Comfortably are two of the prettiest songs they’ve ever recorded and the combination of The Dream, Have You Heard and The Voyage may be the most sublime nine minutes of Moodies music on record. If I were going to pick a favorite album by The Moody Blues, it would come down to this and Days of Future Passed.

While Justin Hayward, Thomas and Edge had each established their own songwriting style, Lodge and Pinder were still unpredictable. Lodge was more likely to write a rocker (case in point: To Share Our Love), but Pinder was hard to pin down. “So Deep Within You” is an ill-advised attempt at Moodies soul. “Have You Heard,” on the other hand, is an inspired attempt to beat The Beatles at their own game with a better version of “A Day in the Life.” That’s write, I wrote better. No one says you have to agree with me (since I know how thin-skinned Beatles fans can be).

As with all the Moodies’ early records, there have been several remasters of Dream over the years, any of which is likely to present the sometimes problematic engineering in a better light. In the robot-powered 21st century, expanded remasters were also released with alternate versions and BBC recordings. Something is lost when the album doesn’t end with “Have You Heard – Part II,” so I’d actually steer you away from the expanded versions.