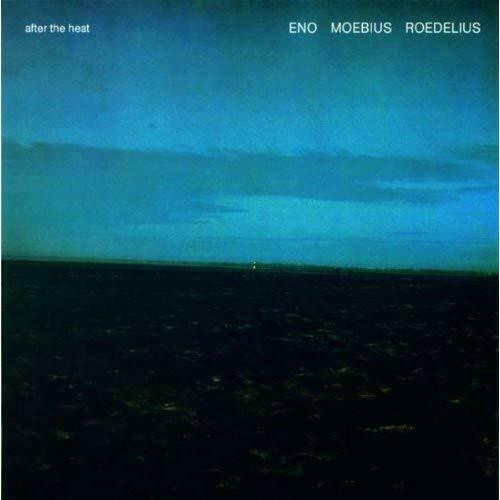 A deeper, darker exploration of the music of Cluster and Eno, including a few vocal tracks!

Cluster & Eno was tinkertoy electronica. I had expected “Warszawa” rebuilt, and was disappointed to find it a gallery of minimalist paintings without a single boobytrap in the batch. Thankfully, the trio rethought their approach for After The Heat. This is a richer, deeper exploration of the pairing’s potentialities, sort of a Music for Four-Minute Films that creates some fascinating landscapes. And it features several songs with actual vocals from Eno!

The opening “Oil” is magic. Like dawn rising on a busy city, new sounds are carefully introduced until the piece is abuzz with ambient shapes. “Foreign Affairs” is nearly as good, employing a toylike melody (Cluster is still Cluster) that explores darker, deeper places musically than Cluster & Eno did. “Luftschloss” lightens the mood and would have, among these songs, felt most at home on their first collaboration. “The Shade” adds treated guitar to the canvas, and side one ends with the static, mesmerizing soundscape of “Old Land.”

The second side of After The Heat is where Eno and Cluster rock out, sort of. “Base & Apex” and “Light Arms” are noisy constructions of metal and wire, reminiscent of Clusters more agitated pieces (e.g., “Prothese”). It sets the stage for one of Eno’s last songs in a long while, the bizarre “Broken Head,” which was later re-purposed for David Bowie’s “Red Money” (a song that, oddly, Eno didn’t receive cowriting credit for). Another song, “The Belldog,” favors Eno’s sentimental side (think “St. Elmo’s Fire”) and is one of the standout tracks from this album. The record closes with “Tzima N’arki,” another noisy song that also looks forward to Lodger and is said to use the vocals from “King’s Lead Hat” recorded backwards (a point I’ve taken on faith).

Unlike Cluster & Eno, After The Heat actually feels like an equal collaboration between the three artists (the first album sounded like Cluster melodies treated by Eno). Stylistically, it fits between the contemporary work of Eno (Music For Films, Lodger) and Cluster, with the caveat that I prefer Cluster and Eno albums from this period to their work together. You’d get more pleasure from listening to Grosses Wasser or Before And After Science—or, better still, Holger Czukay’s Movies—but if you find the whole idea of Eno mucking about in tangerine dreamland irresistible, I’d start with After The Heat before Cluster & Eno.