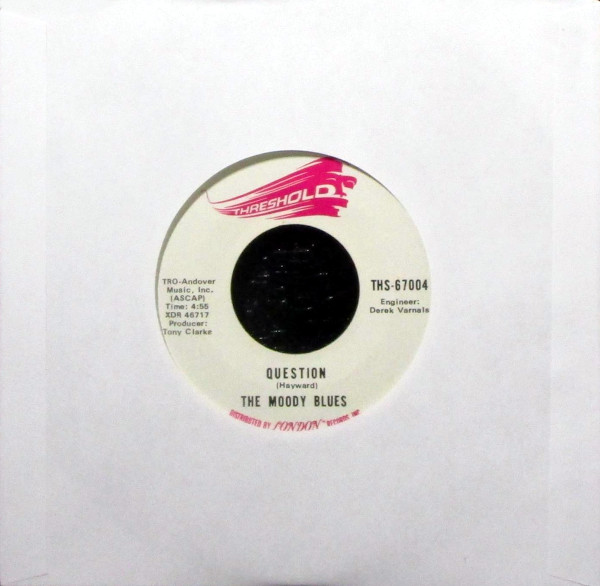 The Moodies question the meaning of life, fans respond by nearly making this their second #1 single.

Kronomyth 5.5: All the love you’ve been giving has all been meant for you.

In the between their fifth and sixth albums, The Moody Blues paused to ask this Question. Maybe they were questioning the meaning of life, the meaning of love, or maybe love is the meaning of life. (Hint: it actually is, although it’s what you choose to love that really matters.) This is a different version than what turned up on A Question of Balance. The mellotron, for example, doesn’t make an appearance until the bridge, and the acoustic guitar is more prominent throughout the song.

The B side was an edited version of Candle of Life, which had earlier appeared on To Our Children’s Children’s Children. One of my favorite songs from that album, the single version fades after repeating the first verse (the original repeats both verses) rather than the long instrumental fadeout featured on the album version. I have no earthly idea why they created an edited version for the B side; it’s not something you see done often.

The Moodies would follow the same “advance release” approach again for “Isn’t Life Strange” in the Spring of 1972. Generally, however, the Moodies didn’t release non-album singles like many of their English contemporaries. They were an album band anyway and, honestly, many of their singles didn’t translate well to the radio because they were more refined than the regular rock & roll fare. “Question” at least held its own with its driving rhythm section, but I prefer the album version, which gets an immediate lift from the mellotron’s clarion call.