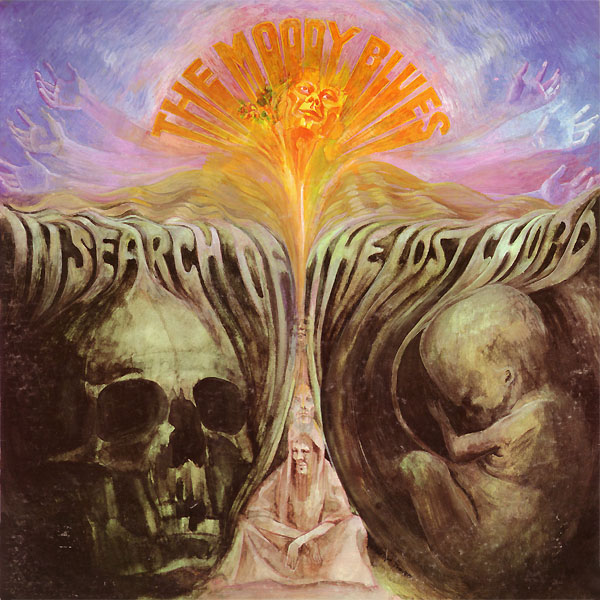 The Moodies ditch the orchestra and go in search of their own sound on this classic elpee.

The Moodies’ followup to Days features a mantra (“Om”), a yantra, and kantya just see where this is headed? In Search of the Lost Chord is the band’s most overtly psychedelic album, a travelogue for the inner eye and ear to accompany the listener’s (wink, wink) meditative state. As good as Days of Future Passed was (is? will be?), you wouldn’t want that orchestra following the Moodies everywhere, so they morphed into a multi-instrumental psychedelic studio band a la The Beatles. The Lost Chord finds them expanding their instrumentation to include sitar, tablas, cellos and whatever the mellotron could conjure.

The results are rarely as succinct as The Beatles but occasionally more thrilling, such as the opening combination of “Departure” (one of Graeme’s recitative bits) and “Ride My See-Saw.” That experience is one of the truly indelible moments in the Moodies’ oeuvre, along with the graceful introduction to “Tuesday Afternoon” and Hayward’s anguished howl in “Nights In White Satin.” Other highlights from Chord include Thomas’ “Legend of a Mind” (beginning with the untimely prediction “Timothy Leary’s dead…”), Hayward’s pretty “Voices In The Sky” and the truly trippy “House of Four Doors/The Best Way To Travel.”

Chord is scripted as a kind of musical transcendental meditative journey, though it’s not likely to propel anyone past their current plane of existence (in other words, no Om-coming is forthcoming). Instead, the album is a trip of the cap to Sgt. Pepper’s and Magical Mystery Tour. With The Beatles about to change direction again, you could argue that the Moodies were now the most successful prog band on the planet, with Days, Chord and Dream foundational stones in the Church of Progrology.