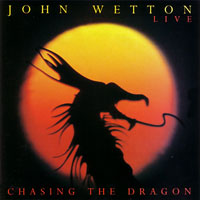 “Calamitous,” the dragon croaked, “and cold. It doesn’t do a dragon well to stay in such an inhospitiable place. And so I left the west for east; tale told.” Except there’s more to it than that, and some. The battle lines had hardly just been drawn when Wetton-san, John asiatic flew. He took with him the tomes of two or three bands well revered among the rising sons: king crimson, asia, uk and the sum of scribblings that he’d jotted in between. Their rendezvous? Osaka, Tokyo, lands long synonymous with dragon’s lairs. The lure? Of lucre green, so too the crew; It Bites and thus the hook stays in secure. As for the bonnie bits, that’s splitting hares. Of course the tracks from Asia tend to shine since, after all, this is their native clime. You came to hear UK you say? Well done. (Grayed Briton is the operative pun.) If Crimson I might ‘ember diff’rently, the Battle wares are better tendered warm; a Crime of Passion or a Hold Me Now better befit, I think, the dragon’s form. I wouldn’t say Japan is Wetton wild and yet they love their old kings and their ghosts. The old kings slumbering, sleep centuries, and rise anew as dragons in the east. The old ghosts need to make a living too, in light of which John Wetton live will do.

The Pictures
Cover by Nick deVille.