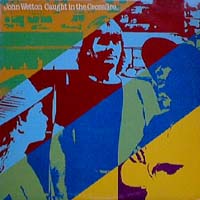 John released his first solo album in between U.K. and Asia, and Caught In The Crossfire both looks back to the one and looks forward to the other. The leadoff track is actually something of a red herring, as John tries his hand at the music of The Police (and what singing bass player didn’t want to be Sting in 1980?). The rest of the album picks up where U.K. left off and prefigures the more commercial sound of Asia. “When Will You Realize?,” “Paper Talk,” “Get What You Want” and the haunting “Cold Is The Night” would all fit that description. “Baby Come Back” and “Woman” (one of two brilliant ballads on this album) could even be seen as Asia Beta. If you’re looking for traces of Roxy Music or Uriah Heep, you may find them on “Caught In The Crossfire” and “Get Away.” Mano a mano, Wetton clearly outmaneuvers Greg Lake in the solo debut department. After years of playing in other people’s bands and contributing lyrics to other people’s songs, Wetton emerges as a singular force capable of writing (and playing) everything. The support he receives here is minimal: drums (Simon Kirke), sax (Malcolm Duncan) and a rare bit of moonlighting from Tull guitarist Martin Barre, who catches fire on “Paper Talk.” Wetton’s long-awaited debut should have charted better, but it’s unclear how much EG Records promoted it. Also, U.K. didn’t leave particularly long coattails to ride on; subsequent copies of Caught In The Crossfire added a sticker that called attention to the Wetton-Asia connection, and likely caught more eyes as a result. If you’re a fan of U.K. or Asia or simply a Wetton watcher over years, this one is definitely worth a shot.

All songs written by John Wetton unless noted.

Expanded CD Bonus Tracks
11. Every Inch of the Way (John Wetton/Curt Cuomo)
12. Out of the Blue (John Wetton/Bob Marlette/Tom Whitlock)