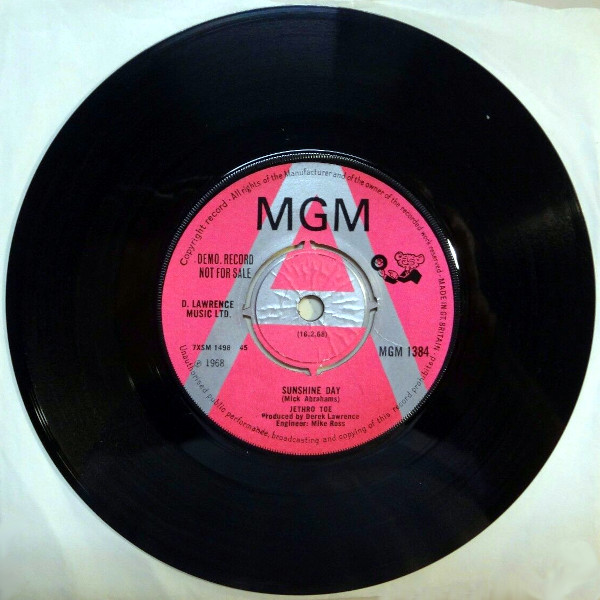 The band gets their feet wet with their first recorded single, featuring two psychedelic blues originals.

By now, you know the tale of Jethro Toe, the nomme de pied unknowingly bestowed upon the band by producer Derek Lawrence. (Talk about not starting off on the right foot.) Lawrence’s connections led to a five-year contract with MGM (purportedly), though it appears the band got the boot soon after. With a very limited release, copies of the single command a high asking price today, to the tune of about $1,000.

Jethro Tull’s first single follows in the footsteps (and, yes, I’ll stop doing that) of the psychedelic blues bands but with some of their idiosyncracies already in place, such as Ian  Anderson’s vocals (which are here supported with harmony vocals from Mick Abrahams) and their clever arrangements. Had these two tracks found their way onto Living in the Past, they wouldn’t have sounded so out of place. Noticeably absent is the flute.

Sunshine Day, written by Abrahams, is overtly psychedelic, which is where a lot of progressive bands started out. The unusual bridge in the middle is a bold move, though it probably would have prevented the single from making any commercial inroads had it received a proper public relations push in the first place. Aeroplane is the stronger track in my opinion, if only because Ian’s voice is more prominent. Originally written while Anderson was a member of John Evan Smash and featuring Evan on various keyboard instruments, “Aeroplane” finds the band on surer footing (I lied). Glenn Cornick gets a cowriting credit under the pseudonym of Len Barnard. Lots of name games on this little single.

I’ve read where “Aeroplane” is actually the version recorded by John Evan Smash with the original saxophone track removed. It’s very possible, as Lawrence had done some recordings of that band a year earlier. Fortunately, if you don’t have an extra thousand dollars socked away (it’s a kind of sickness, really), you can hear these tracks on the expanded head-to-toe remaster of This Was.

“Len Barnard” is a pseudonym for Glenn Douglas Barnard Cornick. (Thank you, Wikipedia.)