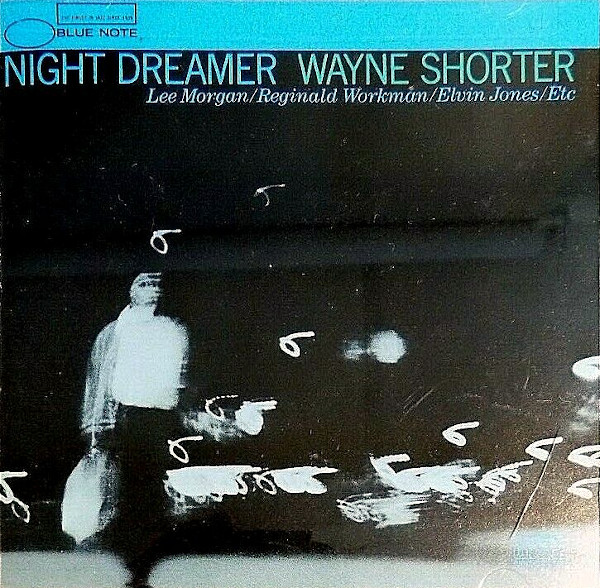 Pleasant dreams from Miles’ new tenor man in his first session for Blue Note, with Trane’s gang riding along.

Kronomyth 3.0: The daydream before the nightmare.

Recorded before he joined Miles Davis and released after, Wayne Shorter’s first session for Blue Note must have felt like a torch was being passed. The fact that Shorter’s band had all played with John Coltrane—McCoy Tyner (who is inexplicably et cetera’d on the album cover) and Elvin Jones in particular were strongly associated with Coltrane—did not go unnoticed too. And yet Night Dreamer seems miles removed from the music that Trane was making. It’s smooth, remarkably direct, the work of a gifted communicator but with no signs of the dark stormclouds to come on Juju and Speak No Evil.

Where Trane knocked you over with his virtuosity, Shorter and the group are much more relaxed on this outing. There are some flashes of genius from Tyner and Jones, but for the most part the band follows Shorter’s lead by playing things straight and simple. It’s the strength of the compositions that do the loudest talking here; Shorter’s melodies arrive warm and familiar, in no hurry to arrive or leave.

The opening Night Dreamer is a smooth, swinging number that sets the album off on a relaxed tone. It’s followed by the sweet Oriental Folk Song, the lone non-original, inspired by a television commercial of all things. Jones’ drums tumble in and out of time, something that Shorter and the band seem to have a lot of on this session. Virgo continues with the same dream-like pacing, only this time Shorter surprises with a completely unconventional solo and Tyner caps it off with some absolutely gorgeous playing. Side one is slow, deliberate, simple, dreamy and not nearly as a diabolical as I expected.

The dreamer awakens on side two. Black Nile is a blast: Shorter comes out swinging, tears it up during a dizzying solo and Elvin Jones is just jaw-droppingly brilliant from bar to bar. Charcoal Blues is a mid-tempo, swinging number that features a nice solo from Tyner. Armageddon ends things on an interesting note, as Shorter mixes melody, mood and a modicum of mystery.

It’s tempting to compare Night Dreamer to, say, Blue Train, but Shorter would come up short in that comparison. Juju and Speak No Evil weren’t comfortable records. Night Dreamer feels very comfortable. It’s professionally played, no question there, but for a cat as strange as Shorter this is a remarkably straight record. The nightmares to come, now those are the things that dreams are made of…

A1. Night Dreamer
A2. Oriental Folk Song (arranged by Wayne Shorter)
A3. Virgo
B1. Black Nile
B2. Charcoal Blues
B3. Armageddon