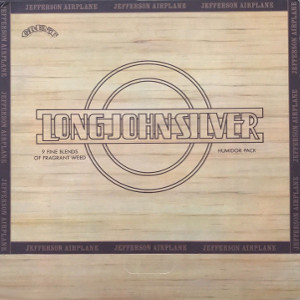 Rolling Stone ripped this a new one on its release, but I never read Rolling Stone. Bark didn’t bite in my book; it was eclectic, sure, but adventurous too. Long John Silver is the last adventure of the Jefferson Airplane. The album cover was designed to shock: it converted into a box to store your weed. The music is also designed to shock: “Easter,” “Son of Jesus,” “Eat Starch Mom.” If you haven’t been offended by Grace Slick already, I can’t imagine being offended now. I felt that Bark showed a band moving in different directions, while LJS is the same band expending the last of its increasingly directionless energy. The record does make a strong case for bringing Papa John Creach on board, as his violin mixes sweetly with the rest of the band and gives the songs a strange, spectral and almost elegiac quality. It had become clear, however, that Slick/Kantner and Kaukoken/Casady had split into separate factions. Kaukoken’s “Trial By Fire” and Kantner’s “Alexander The Medium,” for example, sound like the work of different bands. Slick and Kantner had grown long in the tooth by this stage, writing meandering protest songs and science-fiction fairy tales that felt like Hawkwind transported to an alternate, acoustic universe. As unfocused as it is, LJS is seldom less than interesting. The opening pair of tracks, “Long John Silver” and “Aerie,” are fearless in their freedom and artfully conceived in spots. You’ll find exciting instrumental passages, thought-provoking themes and blows against the establishment—in other words, the same ingredients that are synonymous with the best of Jefferson Airplane. What you won’t find on here is a hit single or definitive moment in the history of the Airplane, making it one of the least essential (if not the least essential) album from the original group. But even a bad Jefferson Airplane album is better than most things, including nearly all of the Jefferson Starship albums that came after.