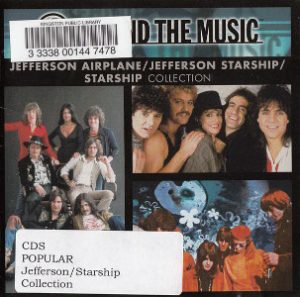 Kronomyth 14.5: BE HIND, REWIND. Combining the pieces of the crashed Airplane and fallen Starship has always been fool’s work, so who better for the job than MTV/VH1? The truth is that no one can reconcile Alice, Jane & Sara, no matter how you build the backstory. And using Grace Slick as the linchpin is nonsense; logo maybe, but structurally speaking she was only one spokesperson in a moving wheel. If I sound grumpy, it’s because the band’s hits were such soulless endeavors. Without Paul Kantner’s islands of integrity to rest at, you’re just swimming in starshit for sixty minutes. By album’s end, you’re left wondering if the original Airplane was anything more than psychedelic stylemongering, given how ingeniously they adapted to the soft rock of the 70s and the studio rock of the 80s. The reason people make compilations like this isn’t to tell a story but to sell records. A single-disc compilation that includes “Somebody To Love,” “White Rabbit,” “Miracles” AND “We Built This City” would be nigh irresistible to most rock radio listeners, they reckon. But it’s a Frankenstein’s monster they’re selling, with the head of a psychedelic 60s band, the hairy chest of a 70s rock band and the butt of a thousand jokes about the 80s. Here’s the story the way I tell it: the Airplane was high from the beginning and crashed after the 60s; Kantner, Slick and (eventually) Balin crawled from the wreckage and started their own commercial airline in the 70s; that airline got bought out by a corporation in the 80s and Grace Slick was hired as their spokesmodel. The first book in the trilogy, Jefferson Airplane, is the only interesting one, so better to buy a compilation that digs deeper into tracks like “Lather” and “The Ballad of You & Me & Pooneil.”

The Players
Audio restoration by Bill Lacey, digital transfers by Mike Harty. The collection was compiled by Bill Thompson and Paul Williams and produced by Paul Williams. I have no earthly idea what that production would have involved, other than calling for “more Starship” in a loud and insistent voice.