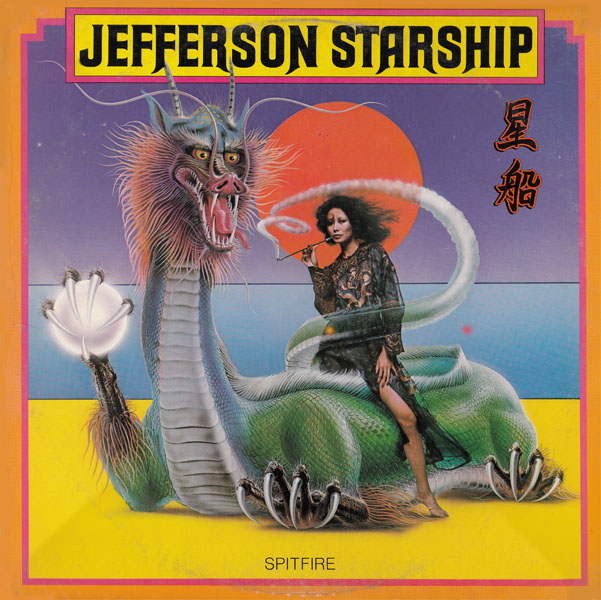 Spitfire is the spitting image of their last album but without the contributions of Papa John Creach (or, for the zen masters among you, the absence of an already-invisible violin). Marty Balin again provided the big ballad, “With Your Love,” and the album furthered the Starship’s winning ways, but on close inspection the band was more fractured than ever. Balin continued to bring in songs from outside the band, Grace Slick barricaded herself behind the acid-spitting dragon queen persona and Paul Kantner’s journeys into space grew more quixotic and less coherent. A lot of successful bands in the 70s had individual egos to feed: Eagles, Fleetwood Mac, Grateful Dead. My impression of Jefferson Starship is a seven-headed hydra that feeds on itself. They’re a female-fronted rock band, psychedelic dinosaur and soft-rock peddler rolled into one monster. At this point, it’s obvious that I’m not buying into the Jefferson Starship experience. They need to manage their portfolio better; consolidate rather than diversify or dazzle us with diversity. I think I would prefer a solo album by Balin, Kantner or Slick at this stage, knowing that they had some actual skin in the outcome, rather than Spitfire’s mediocrity by committee. Of course, Starship fans will tell you this is a solid album, and they’re right. The material here is as good as anything you’ll find on Octopus or Earth, with highlights that include “St. Charles,” “Song To The Sun” and that minor miracle of pop music, “With Your Love.” It’s just that Spitfire, like most Starship albums, is a lighter record than the sum of its parts would indicate. Take Balin’s ballads out of the equation, and you’re holding a very average 70s rock album in your hands.

The Plastic
Originally recorded at Wally Heider Studios in San Francisco and released on elpee, quadrophonic elpee, cassette and 8-track in June 1976 in the US, the UK and Canada (Grunt, BFL1/BFD1/BFK1/BFS1-1557) and in Japan (Grunt, RVP-6087) with lyrics innersleeve; reached #3 on the US charts (RIAA certified platinum record) and #30 on the UK charts. 8-track features different track order.