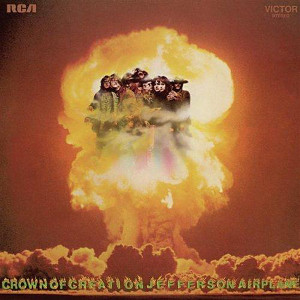 Time flies on this standout collection of songs from these redoubtable flyers of psychedelic space and time.

Picking a favorite Airplane ride is probably fool’s work; they all take you to different places, and it depends on the mood you’re in. The band reined in the experiments of Baxters and wrote what might be their strongest collection of songs for Crown of Creation. Listening to this album, you get the sense that the band had grown up or grown closer. They still continue to bring their individual ideas to the studio, but the arrangements display a groupthink that was noticeably absent on the sprawling Baxters. Marty Balin, for example, is no longer the out-of-place balladeer. Cowriting two tracks with Paul Kantner, the pair strike upon the quintessential Airplane sound, from the trippy “In Time” to the explosive “The House At Pooneil Corners.” Grace Slick breathes life into legend one moment (“Triad”) and cuts down the counterculture scene the next (“Greasy Heart”). Jorma Kaukonen kicks in two surprisingly succinct psych-rockers, “Star Track” and “Ice Cream Phoenix.”

Although this doesn’t appear to have been the case, Crown of Creation sounds like a double album of material distilled down to its most essential moments. You won’t find any arid stretches of experimental acid trips (Spencer Dryden’s “Chushingura” exorcises those demons in just over a minute) or unnecessary ego feeding. The tracks that make the cut, like “If You Feel,” are there because they deserve to be there. Maybe the word I’m looking for is balance. Crown of Creation strikes the perfect balance between superlative playing (Jack Casady, Spencer Dryden and Jorma continue to be the music’s diving force), big ideas, advanced production and psychedelic experimentation. It’s all neatly contained by those two bizarre bookends, “Lather” and “The House At Pooneil Corners,” even as it threatens to burst at the seams from rebellion and science fiction. All of the original Airplane albums are great rides, but Crown of Creation may be the least bumpy, which has more to do with the band working from a map than a dampening of their daredevil spirit.

CD reissue bonus tracks
12. Ribump Ba Bap Dum Dum
13. Would You Like A Snack?
14. Share A Little Joke
15. The Saga of Sydney Spacepig

2LP reissue track listing
A1. Lather
A2. In Time
A3. Triad
B1. Star Track
B2. Share A Little Joke
B3. Chushingura
B4. If You Feel
C1. Crown of Creation
C2. Ice Cream Phoenix
C3. Greasy Heart
C4. The House At Pooneil Corners
D1. Ribump Ba Bap Dum Dum
D2. Would You Like A Snack?
D3. Share A Little Joke
D4. The Saga of Sydney Spacepig