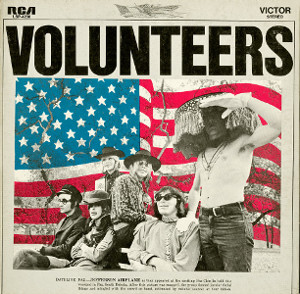 [Kronomyth 6.0]
Airplane Against the World, Motherf*cker.

Click. Ah, there it is, that soothing sound as another piece is added to the Jefferson Airpuzzle. You’ll indulge me my strange obsession, I’m sure, peering over my shoulder to see what I’m scribbling while the tigers crouch in the corner and smile. Never mind the tigers, since I’m the only one who sees them anyway: the beggars’ banquet table as unholy altar, the empty banquet table of the dead, the empty rest-rooming place of a legend. We’ve talked before about the shifting spectrum of music in the late 60s, from black to rainbow to red, white and blue. You could hear it in the music of The Rolling Stones and on Volunteers too. Any conversation of Jefferson’s sixth should really begin and end with its two revolutionary anthems, “We Can Be Together” and “Volunteers.” But the conversation doesn’t end there. There are side conversations that must take place around the contributions of Nicky Hopkins, who gives their music a more serious dimension, and the inspired lead guitar work of Jorma Kaukonen, wielder of psychedelic lightning bolts. And then there’s that troublesome card facing us on the table, the mutinous lovers, who seem to wrest more control of the airplane with every album. Or we could talk about the band’s newfound affection for the country (“The Farm,” “Good Shepherd,” “A Song For All Seasons”), which effectively replaces the psychedelic experimentation of past albums and pre-figures the direction that the Dead would soon take. It’s a lot to discuss, more than I care to do really, and any discussion would omit some important detail anyway, as there are so many important details to capture. The band’s dark and stormy voyage through “Wooden Ships” could consume one thousand words alone. I could spend another thousand or more on “Eskimo Blue Day” and “Hey Fredrick” each. As we’ve already established, though, these reviews are merely the scratching of a nervous itch, a missing piece of discographical detail to be added, catalogued and applied as a soothing salve to an anxious mind. For your troubles, I’ll give you a short summation of Volunteers. It’s the best album from the band’s classic lineup and also their last, showing a newfound interest in the burgeoning country-rock scene, marked by the stellar musical contributions of Jorma and Nicky Hopkins (last seen at Beggar’s Banquet) and displaying an ever-increasing depth of songwriting from Paul Kantner and Grace Slick. It also contains the band’s most succinct counterculture anthems. You can lament the slow disintegration of Jefferson Airplane, but it’s unlikely they would have reached greater heights than Volunteers.