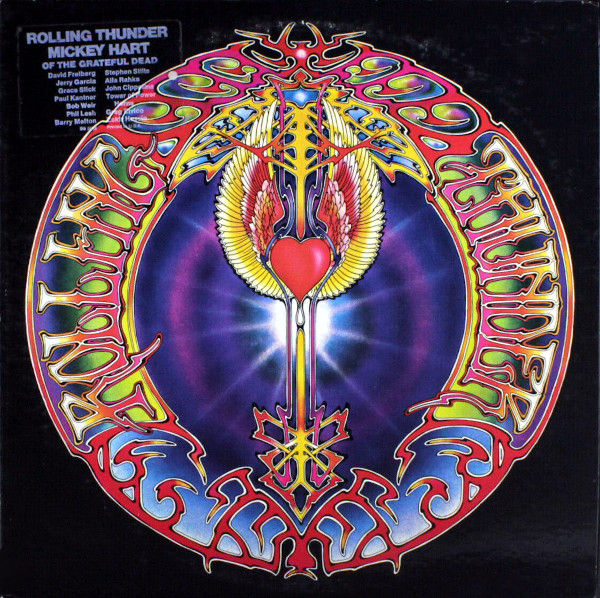 The Dead’s other drummer shows he has his own Ace up his sleeve with a surprisingly good mix of songs and instrumentals.

If you ever wondered why the Dead needed two drummers, hear is your answer. Billy Kreutzmann played the straight man, jazz schooled, capable of thrills and fills but never far from the backbeat (for reference, listen to his performance on Jerry Garcia’s first solo album). Mickey Hart is a very different drummer; his is a cosmic journey to explore rhythm in all its various guises, from the natural to the supernatural. Rolling Thunder reveals that journey in its early going, although Dead fans will find plenty of familiar stops along the way, from jam sessions with Jerry Garcia (“The Chase,” “Deep, Wide And Frequent”) to actual rock songs (“Playing In The Band,” “Blind John”).

If you have any expectations of what a Mickey Hart album would sound like, of course, you’ll need to leave those antiquated notions at the door. You weren’t expecting it to start with a howl and an Indian invocation. You weren’t expecting the Tower of Power horn section or the demented psychedelic pop of “Fletcher Carnaby.” While there is no such animal as a typical Mickey Hart album, his subsequent efforts have focused mostly on rhythms rather than traditional song structures. Thus, Rolling Thunder is, if not atypical of his later work, not representative of it either.

It would seem that Hart was initially double minded as to whether he should make a proper solo album or use the opportunity to explore new musical realms, so he chose both paths. “Playing In The Band” and “Pump Song” will remind listeners of Bob Weir’s Ace, “Blind John” suggests a hippy-trippy Traffic featuring vocals from several key members of the Jefferson Airplane/Starship axis, and “The Chase (Progress)” points forward to future works such as Diga and Yamantaka. Ultimately, Rolling Thunder is a mixed bag featuring some famous buds, a few good songs and some interesting experiments interspersed.

C.J. Stetson appears to be a pseudonym for Jim Staralow (a.k.a. “Curly Jim”). You can read more about it on the Dead blog, Hooterollin’ Around.