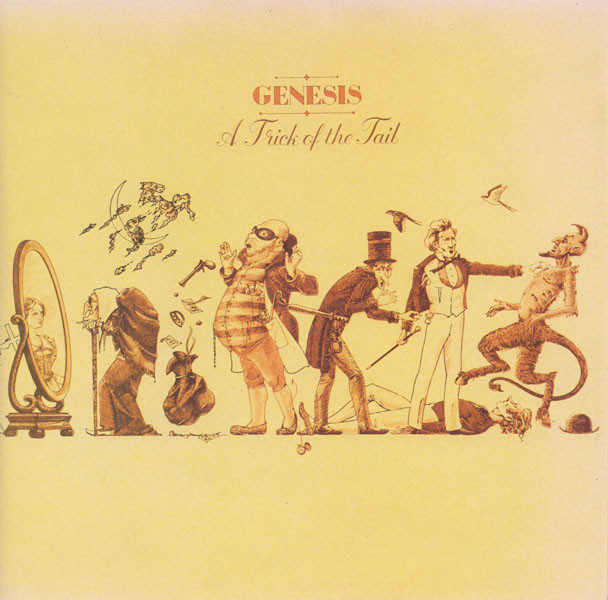 Some sleight of hand as Collins replaces Gabriel, but there’s still plenty of magic left.

The departure of Peter Gabriel for greener hills left Genesis in disarray for more than a year as they sought a suitable replacement. Turned out the best man for the job was already suited up, and Phil Collins was thrust into the spotlight as the new lead singer for Genesis. (That Collins was still the de facto drummer for Genesis would present some logistical challenges on stage for the rest of their careers.) Collins doesn’t relish the role of lead vocalist as Gabriel did, though he does some appreciable playacting in Tony Banks’ “Robbery, Assault & Battery.”

The real story of course isn’t how much the band had changed, but how much had stayed the same: the towering and sometimes terrifying arrangements (“Dance on a Volcano”), pastoral passages (“Ripples”) and wonderful melodies couched in highly inventive arrangements (“Trick of the Tail”) all point back to Selling England. And yet a Steve Hackett solo album in the interim and the loss of their charismatic linchpin left cracks in the garden wall, making it easier to see Genesis as a collection of individual contributors rather than a cohesive whole. (Tail also took the previously unthinkable turn of attributing songs to individuals rather than the group as a whole.)

“Dance on a Volcano” and “Entangled,” for example, would have felt right at home on Hackett’s Voyage of the Acolyte, while the songs written by the trio of Tony Banks, Collins and Mike Rutherford (e.g., “Mad Man Moon,” “Squonk”) foreshadow the fuzzy and large-sounding creations to come. While neither as inventive or absurd as their last few albums, A Trick of the Tail still stands head and shoulders above most of their progressive rock peers and proved that the exodus of Gabriel wasn’t the end of the Genesis.

All material arranged by Genesis.