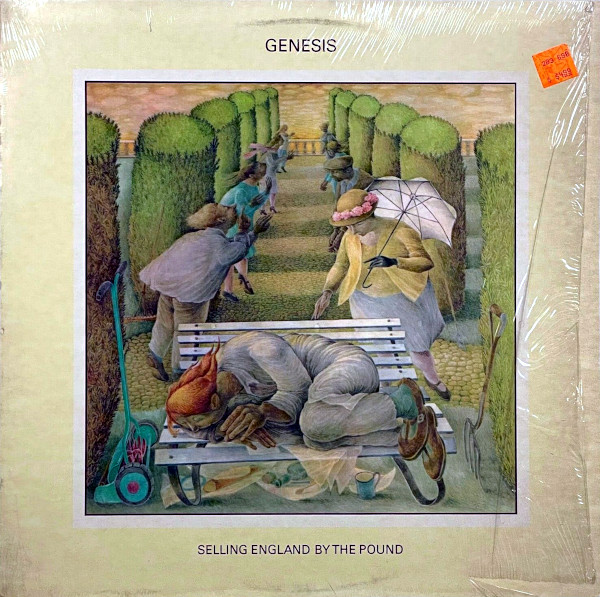 The real stars were, indeed, still to appear on this celestial alignment of sound and vision.

Kronomyth 6.0: Worth its weight in gold.

Progressive rock is a kind of musical storytelling. The last two Genesis albums, Nursery Cryme and Foxtrot, certainly fit that description. Maybe even Trespass too. But Selling England by the Pound elevated the discussion with sounds that felt like a fantasy tale come to life. The guitars from Stephen Hackett, the keyboards from Tony Banks and the vocals from Peter Gabriel are almost otherworldly in their expression. Add in the rhythm section of Phil Collins and Michael Rutherford, and you have some of the most sublime music ever to grace the diamond’s edge.

The songs on Selling England by the Pound are rich tapestries of sound that often feature several sections stitched together, like “Supper’s Ready” but compressed. Dancing with the Moonlit Knight, Firth of Fifth, The Battle of Epping Forest and The Cinema Show/Aisle of Plenty fit this description and collectively stand as some of the greatest progressive rock songs ever written. The same principle was at work in “Get’ Em Out By Friday,” but the arrangements are a bit more grandiose, the execution a bit more confident this time.

There are also several shorter songs on the album to break up the heaviness of such weighty epics. I Know What I Like (in Your Wardrobe) even gave the group their first hit single. More Fool Me is a harbinger of things to come with Phil Collins on lead vocals, while After the Ordeal is an instrumental piece that serves as a pleasant connector. (Fans of these last two tracks would do well to check out Anthony Phillips’ The Geese and The Ghost.)

I’ve listened to thousands of albums, yet Selling England by the Pound and Foxtrot have remained at the top of my list over the years alongside Close to the Edge, Fragile, The Yes Album, Minstrel in the Gallery and Songs from the Wood. Each of those albums is a warmly remembered adventure, and this an old friend from bygone days of battles, madrigals, water nymphs and legends.

All tracks done by all.