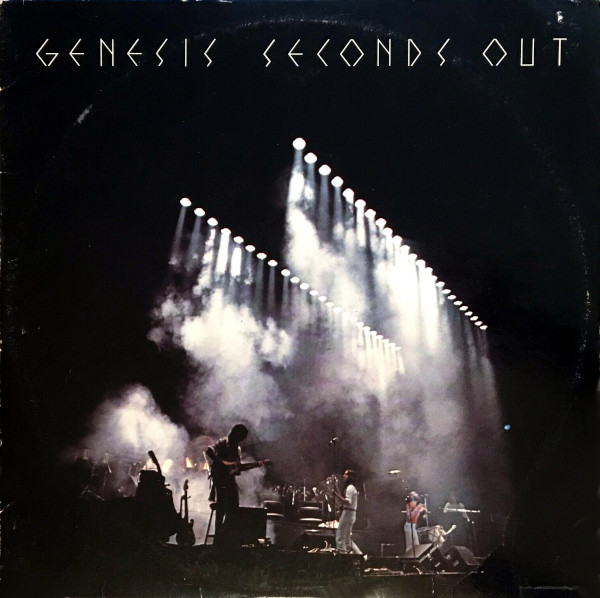 A double live lp’ing from the group’s 1976/77 tour featuring Phil Collins on vocals.

Genesis never released a great live album, not for lack of trying but for lack of timing. Genesis Live was released too soon, Three Sides Live too late and the magic had long departed by the time The Way We Walk ambled across the dimming stage. Seconds Out stood the best chance of capturing Genesis at their artistic peak, yet its success unfortunately rests on the willing but still-wobbly shoulders of new frontman Phil Collins.

Not only does Phil fail to fill the enormous shoes of Peter Gabriel (which is understandable), he doesn’t even rise to his own studio standards on tracks like “Robbery, Assault And Battery” or “Squonk.” By shrinking from the spotlight (audibly anyway), Phil’s humble delivery becomes the unwitting focal point. The rest of the band is brilliant, delivering all of the energy and color that imbued the originals, but the music obscures the vocals, and what you’re left with is a performance that sounds as shrouded as the album artwork looks.

That was my impression when I heard this on an 8-track tape years ago, and it remains my impression today as I listen to the definitive edition remaster. The fact is, there is no definitive Genesis live album. In such stunted company, Seconds Out wins by default. There is nothing on the other live albums that compares with hearing a complete version of “Supper’s Ready” or such sublime moments from their last two albums as “Afterglow” and “Dance on a Volcano.” With Phil at the microphone much of the time, Genesis enlisted drummers Chester Thompson and Bill Bruford (briefly) to support the group, with Phil often playing alongside them for a double attack. Thompson is terrific, and I don’t need to sell anyone here on the merits of Bruford and Collins.

This was the last album to feature Steve Hackett, so in many ways Seconds Out marked the end of an era. I would have liked to hear Phil come out swinging, wringing the dramatic possibilities from this material the way Peter would have, or at least with the energy of Trick of the Tail and Wind & Wuthering, but you can’t always get what you want. As the joke goes, he got better. Unfortunately, the material didn’t.

Original 8-track version
A1. Squonk
A2. The Carpet Crawl
A3. Dance on a Volcano
A4. Los Endos
B1. Cinema Show
B2. Afterglow
B3. The Lamb Lies Down on Broadway
B4. The Musical Box (Closing Section)
C1. Supper’s Ready
D1. Firth of Fifth
D2. I Know What I Like
D3. Robbery Assault & Battery