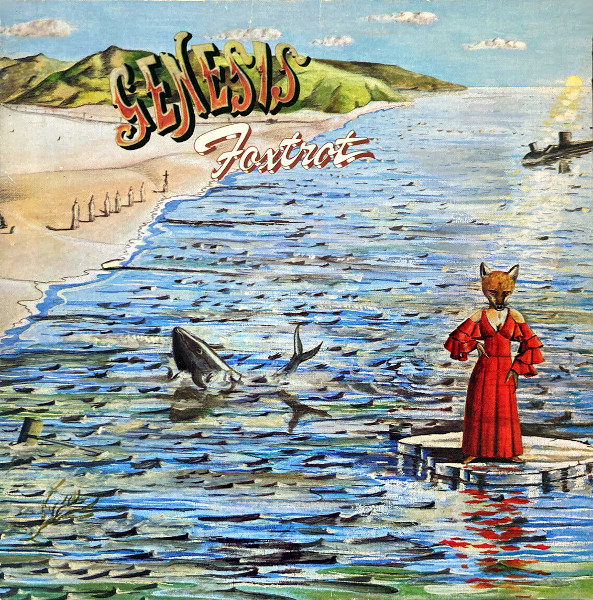 Genesis graduates from the nursery to higher education with this progressive rock classic.

Foxtrot is one of my five favorite albums. Minstrel in the Gallery, Selling England by the Pound, Fragile and Close to the Edge are the others. When I was young and single, I used to imagine that if I knew the world were going to end in thirty minutes, I would listen to Supper’s Ready. And then stare off awkwardly into space for seven minutes, dying as I lived.

These days, of course, I have faith and a family and Foxtrot, in that order. I still have yet to encounter a song that sums up the human existence so well as “Supper’s Ready.” “Heart of the Sunrise” comes close. “Baker St. Muse” does too, when I’m in a darker mood. But Peter Gabriel’s Christian upbringing connects earth and Heaven in a way that Ian Anderson and Jon Anderson never cared to.

Although clearly patterned after the play-acting of the previous Nursery Cryme, Foxtrot is also a product of its progressive times, which would have notably included Aqualung and Thick as a Brick and Fragile. In fact, the whole second side of Foxtrot may not have existed without those albums. Steve Hackett’s acoustic guitar introduction, Horizons, has its clear precedent in Steve Howe’s “Mood for a Day,” while the multi-part, album-length “Thick as a Brick” paved the way for “Supper’s Ready.” Those albums also featured a heavier sound, and in many ways Foxtrot is the heaviest album that Genesis ever made.

The album opens with Watcher of the Skies, invoking nothing less than God and creation in its arched cathedral of sound. Time Table is a sublime retelling of Arthurian legend and perhaps as close as any band has ever come to re-creating the world of literary fantasy in music. Get ‘Em Out By Friday is Gabriel’s play-acting at its peak, and one of the most socially biting songs that Genesis has released. Can-Utility and the Coastliners, despite its inscrutable title, returns to the theme of a savior and closes the quartet, a perfect progression of progressive rock.

Side two starts with “Horizons,” Hackett’s classical guitar solo based on a piece by J.S. Bach. What follows is unquestionably the band’s magnum opus, “Supper’s Ready.” Stitching different pieces into a remarkably rich tapestry, the entire piece is one highlight after another. Mere mention of its morsels—“a flower!,” “walking across the sitting room…,” “Mum to mud to mad to dad,” “And as you listen to my voice to look for hidden doors, tidy floors, more applause”—conjures treasured memories for Genesis fans. I don’t doubt that many have memorized it word for word, a badge of honor like memorizing Monty Python skits but less annoying.

Now, on some days I prefer Selling England by the Pound, a dilemma no less difficult than choosing a favorite child. Yet my affection for Foxtrot has not waned since that first encounter. Each listening renews my loyalty afresh, each retelling returns me to its fabled lands. If you haven’t heard this album, think not now your journey done. And, when you do arrive, remember: You’ve been here all the time.